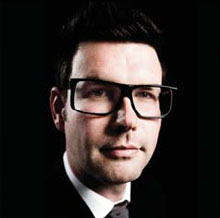 Like Johnson Banks, London branding group Someone hit the big time last year. The main difference between the two is that many of Someone’s projects have yet to see the light of day, so this year could be equally important for the group run by the larger-thanlife trio of Simon Manchipp, David Law and Gary Holt.

Projects include the pictograms for the 2012 London Olympic Games, and branding for Eurostar, Russian telecoms giant Yota and Amnesty
International – and that’s just for starters. Interestingly, the trio say clients often confide that Someone won the work on the strength of its strategic approach, when, in fact, it claims not to have one.

One thing that sets Someone apart from many of its peers is that co-founders Manchipp and Law are designers who have worked in advertising. Holt, meanwhile, worked for years with broadcast design star Martin Lambie-Nairn before joining Someone after a solo stint. Perhaps because of the time with ad agencies – then as No one – Someone has always been open to collaboration with other groups.

These include the likes of digital consultancy All of Us and Simon Waterfall’s co-operative Fray, which heads the Yota work.

Manchipp, in particular, is known to hold strong views and raised his head above the parapet this year with the pronouncement that the logo is dead, fuelling much debate. A glimpse at Someone’s portfolio shows it doesn’t always practice wht it preaches.