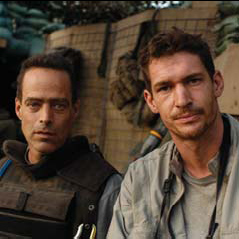 Deep in the heart of Afghanistan in the summer of 2007 British photographer Tim Hetherington (pictured right) and American journalist Sebastian Junger (left) risked their lives to document the human side of war. The film they made, Restrepo, explores the year the duo spent embedded in a hillside in the Korengal Valley alongside US combat troops on an assignment for Vanity Fair magazine.

As bullets whizzed around the camera and explosions claim more lives, Hetherington kept filming the gut-wrenching tale of trauma, loss and sacrifice by the soldiers doing their duty for their country. Restrepo is an outpost named after a platoon medic who was killed early on in the conflict, and thereby became the title of the film as it is emblematic of the soldiers’ experiences and represents the losses they go through.

Restrepo is Hetherington’s film directorial debut and received the grand jury prize for best documentary at the 2010 Sundance Film Festival. And while Hetherington and Junger did not set out with a political agenda, the two describe the film as a portal for the public to understand and enter a political discussion of war.

Hetherington is honoured in this year’s Hot 50 for his contribution to photojournalism. He creates diverse forms of visual communication and his work to date has ranged from an array of multi-screened installations to fly-poster exhibitions.

The local design network scene is great, but it does need some co-ordination

7Up launches new branding and packaging