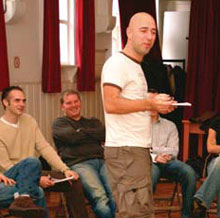 The word that is ringing in most people’s ears from last year is ’cuts’, with its predecessor being ’recession’. But despite the huge public spending cuts, the Government is pouring cash into professional training bursaries – particularly within the design sector.

This year Westminster City Council in London has implemented a very generous bursary system for creative businesses to send their staff on training courses, ring-fencing most of the money from the spending cuts.

Advertising and design body D&AD has, meanwhile, been granted about £20 000 in bursary funding from Westminster since August 2010, across 40 places on courses geared towards creative industry practitioners. This is but one venture through which Westminster has shown that it wants to build a reputation as a leader in creative and cutting edge-design. In 2008, a design initiative led by The Prince’s Foundation for the Built Environment worked with the council to make London’s Chinatown more ’authentically Chinese’.

The borough is also responsible for several rejuvenation projects.

The radical makeover of Centre Point at the junction of New Oxford Street and Tottenham Court Road, for example, will attract new businesses and retailers to the area.

Crossrail, the £1.25bn rail scheme, is also well underway, promising improved east-west rail across central London. While it may not be fully open until 2017, the new transport link will help the West End become more accessible and relieve congestion on existing Underground and National Rail networks.

Westminster maybe exceptional as a borough, given its size and healthy mix of businesses, entertainment venues and tourist attractions, as well as residents. But it is using its might to good effect.

Designers, academics and a monk