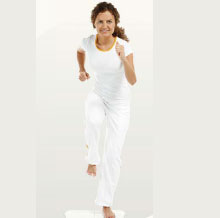 Designed by Hiroshi Matsunaga for Nintendo, the Wii Fit exercise game has broken records for sales across the world. Deemed to be the world’s third-bestselling console game, it has promoted the idea of taking exercise at home, with members of a family or groups of friends taking part in the fun, but it has also been adopted by health clubs and other social facilities.

Players stand on the Wii Balance Board as they operate the video game on screen. Not only is Wii Fit actively encouraging greater fitness across the world, it can also be used in remedial treatments – it can, for example, help to improve posture in elderly users. The basic idea has been adapted to suit a variety of exercise regimes, including yoga and aerobics.

The games industry continues to throw up creative and technical innovation (see page 23). That it can provide entertainment and promote healthier lifestyles through what is normally a sedentary pursuit is credit to the foresight of Nintendo and the appropriate design Matsunaga has produced.

With the 2012 London Olympic Games looming, the focus in the UK has shifted towards exercise and sports, particularly among the young. Wii Fit might not help with this but it could be useful in addressing issues such as child obesity.