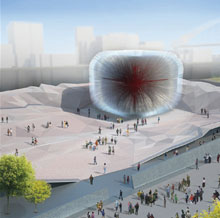 The UK Pavilion designed for the 2010 Shanghai Expo is a triumph on all counts.The breakthrough Seed Catherdral was designed by Heatherwick Studio,with Katerina Dionysopoulou as the lead architect. It comprises fibre-optic quills containing seeds and has won any number of creative and architecture awards, culminating in the prestigious RIBA Lubetkin Prize.

The pavilion has been hailed as an aesthetic, technological and environmentalwonder, but it is also a great example of teamwork. Itwas achieved against the odds thanks to the likes of Sir John Sorrell, who was involved in commissioning Heatherwick, outgoing director of the Victoria & Albert Museum,whowith Sorrell advised on content, and UK Trade & Investment chief executive Sir Andrew Cahn, who worked to secure funding.