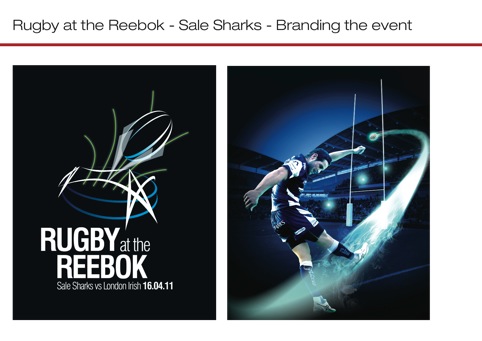 If was appointed in October, having been approached by existing client, the Sale Sharks rugby team to create branding for the Bolton event.

Jo Whiteley, creative director at If, says, ‘It’s a big opportunity for the team and to get a bit of energy around rugby generally. There’s not a huge following in the North West, so as the final game of the season we want to make it a big event.’

The posters aim to capture the atmosphere of a live sports event and reflect the power and scale of the rugby players, using a photographic style intending to amplify their ‘superhero’ characteristics.

The logo uses a bold, typographic style aiming to ‘balance and accommodate the distinctive illustration of the ball shooting out of the stadium’, says Whiteley.

The integrated campaign will roll out at the end of February, and will run until all 30 000 tickets for the event have been sold.