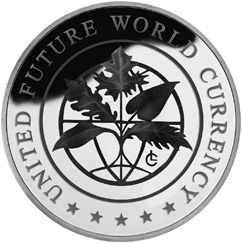 Designed by Laura Cretara, former chief engraver of the Italian State Mint, the coin has been made for United Future World Currency, an organisation that is aiming to produce a unified currency not linked to any single government.

Cretara has designed the ‘Tree of life’ insignia, which will appear on all UFWC coins. It depicts five different leaves found on all five inhabited continents.

The prototype coin, which contains one ounce of silver, was developed by Cookson Precious metals UK, using its ‘ecosilver’ technique to expend less energy in production.

The 40mm coin has been struck to proof quality – a collector’s standard – and uses only recycled metals.

UFWC founder Dr Sandro Sassoli says, ‘As we are looking for this unit to be a future world currency, it is only fitting that we use the world’s present resources.’

We can unite from the outside to the core

Private investment in culture drops by 3 per cent, research shows