The DfE has responded to a letter sent by Design Week to Education Secretary Michael Gove last month, which urged him to include design and creative subjects in the EBacc measurements.

The EBacc measurement currently focuses on just five pillars of study: maths, English, sciences, languages and humanities, and the proposed English Baccalaureate Certificates, which could replace GCSEs in 2017, would also exclude design.

The DfE letter says, ‘The National Curriculum is being reformed to give teachers greater flexibility over how to teach, so more children can be inspired by great teaching in subjects like art and music.

‘But there is no intention to remove, or downgrade, any cultural subject from within the National Curriculum.’

However, it does not suggest that design and creative subjects would be included in the future curriculum, instead saying that they might form part of extra-curricular activities.

The DfE says, ‘Schools which do well in the English Baccalaureate tend also to devote considerable time and care to artistic and cultural education.

‘Ministers believe that there is plenty of time in the school day and school week to complement the English Baccalaureate subjects with artistic and cultural subjects.’

The DfE adds that ‘many of the subjects in the English Baccalaureate do have huge cultural importance’, citing English, languages and classics.

It also says that EBCs are intended to be ‘tests of academic knowledge’ and as such creative subjects might not naturally fit into their structure. It says it is working with the Arts Council to look at ways to assess these subjects.

The department also pointed out the range of arts and cultural initiatives that it currently supports, which includes the expansion of the Sorrell Foundation’s National Art & Design Saturday Clubs.

Consultation on the proposed EBCs closed at the end of last year, and a response is expected from the DfE this year. 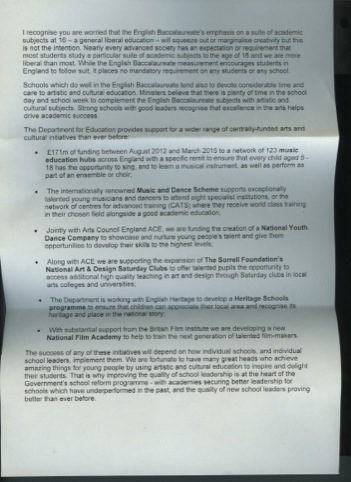