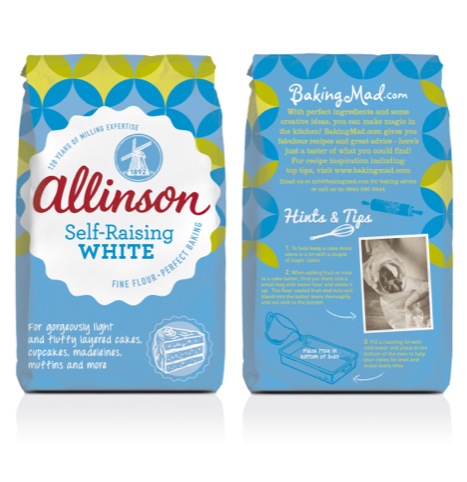 Family and Friends was brought in to work on the project by Allinson Flour parent company Silver Spoon without a pitch having previously updated the branding for the Allinson bread range.

It was tasked with creating new designs that would help raise consumer awareness of Allinson’s culinary range, looking to ‘get more cake-making consumers interested in the brand’, according to Family and Friends co founder Derek Johnston.

Family and Friends creative director Alex Durbridge says, ‘The target consumer isn’t the “cupcake and once a year birthday cake makers”, it’s appealing to “accomplished” bakers; people who bake a lot for practicality as well as pleasure, so the rebrand needed to be bold in its newness.’

The new packaging features a ‘Sack Pattern’ design, chosen for its ‘modernity’ and the fact that in researching the designs, ‘the vast majority of people were “happily surprised” by the design’, according to Family and Friends.

The bread flour and culinary flour ranges are differentiated with a circular device for the bread, and a cookie-cutter shape holding the Allinson logo on the culinary flour.

The incumbent bright colours have been retained, with new geometric patterns based on ‘homely’ items such as tea towels and ‘kitcheny stripes and checks’, says Johnston.

The new packaging also sees the reintroduction of the original Allinson trademark windmill back into the identity ‘to give a greater sense of heritage and recognition’, it says.

The new look will start to roll out this week to trade, with the main launch taking place on 22 February.

The Plant works on MasterChef branding