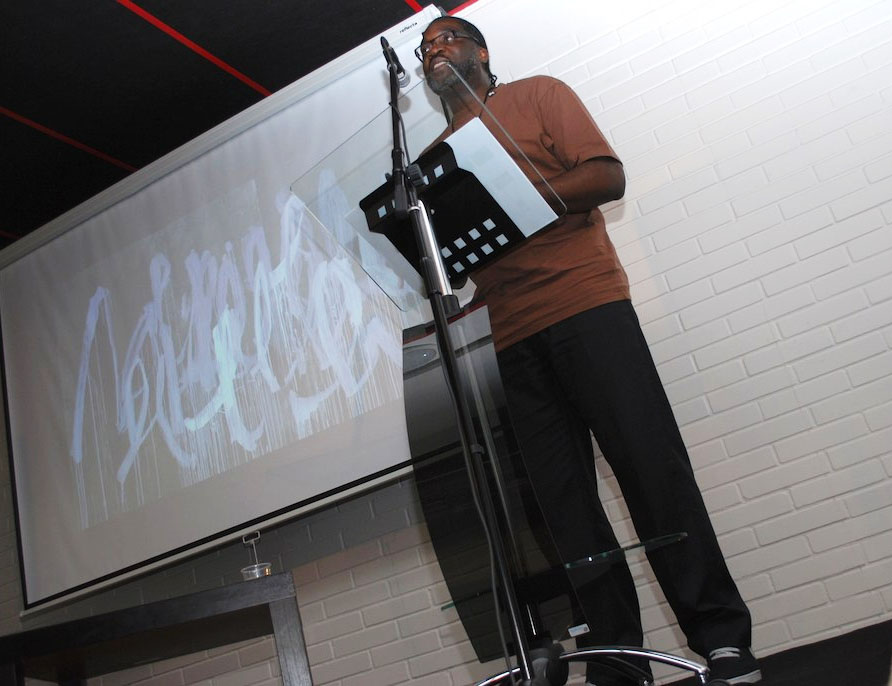 I was born and raised in West London to Jamaican parents. I was fascinated by the many ways in which the youth of my elder brother’s generation chose to express their own identities. From music, politics, right through to fashion and attitude. Culture and creativity seemed to go hand in hand. In trying to be different, I drew inspiration not just from my immediate surroundings and largely Caribbean culture, but also from anything that seemed to challenge the norm, and so I became very curious about how culture was being expressed elsewhere. I studied graphic design at Camberwell School of Art and enjoyed the multi-disciplinary environment and emphasis on traditional practice. Around the same time, Hip Hop had made its way into the UK, and I was hooked! The references to popular culture, politics, and community, confidently expressed by my peers caught me at a time when I was ready to make my own mark as a creative artist. I quickly established myself within London’s Hip Hop community as a graffiti artist with The Chrome Angelz. As a collective, we shared a passion for the visual arts and traditional arts practice and sought to find a way of honouring the original pioneers of the movement, by developing a distinctly European aesthetic. It was a completely new and exciting education for me. I took a year out from my degree studies to paint, collaborate, and experiment. We were very active across the UK and in Europe, yet retained the freedom to carry out solo projects that took us all in new and interesting directions. The autonomy gave me the ideal opportunity to freely express my own ideas across a range of creative disciplines. The Spike T-shirt was a self-initiated project. I wanted to capture the tension between cultural and corporate identity in a single image. It was part of a series and was undoubtedly the most popular! I returned to complete my degree with a lot of confidence, and dedicated my final year to academic research that examined the creative, social, and wider cultural impact of graffiti culture.

After graduating, I made the most of my mixed skillset and gained a lot of industry exposure through film, TV and advertising projects. I also began to play a more meaningful role in my community, working in the arts and education, and was invited on to the board of ACAVA, an arts charity based in West London. A few months later, I joined the in-house team at Michelin – a very traditional brand with a proud lineage. Though a little challenging at first, there I was able to utilise my range of skills and experiences and made the transition to commercial branding, which to me shared a number of similarities with brand-conscious nature of graffiti and hip-hop culture. I’ve gone on to enjoy a successful career in the business sector, leading creative teams for global brands across a number of industry sectors (energy, finance, property, law). I love the intercultural enagement the most, as there’s always a part of me that’s able to facilitate a sense of shared understanding.

As an artist, my early efforts to take graffiti art into (then new) spaces polarised opinion amongst graffiti artists, and the general public. Both audiences were wary of the impact that graffiti would have on their respective communities as it sought ‘acceptance’ in the public realm. As a design professional, my mixed skillset opened some doors, and kept others firmly closed. The familiar dilemma of tailoring my portfolio was worsened by the fact that clients were wary the negative impact on brand and reputation brought on by association with graffiti culture.

Who and/or What are your greatest inspirations and influences?

My parents and my son, Wesley. Broadcaster and author Alex Pascal was the first to paint a picture of the world outside my window by weaving together culture and creativity. Books: Photographer Charlie Phillips’ – ‘Notting Hill in the Sixties’, Watching my name go by – Norman Mailer and Jon Naar, Getting Up – Craig Castleman, and many more! Not surprisingly, I’m drawn to maverick creativity. My tastes are quite varied and include everything from Thelonious Monk to P-Funk, Alvin Ailey to David Mamet and Ricky Jay. I also admire the wit of Patrick Caulfield and the works of designers Ron Arad, Philippe Starck and Terence Conran. It goes without saying that graffiti and hip-hop culture have provided many amazing moments. I was year into my degree and came across an article on the visionary artist and performer  Rammellzee. His unique theories on lettering and language left me mesmerised.

My first exhibition at the Arnolfini gallery in Bristol means a great deal as it was my first gallery experience, and I think it one of the first shows in the UK dedicated to graffiti art. I’ve been lucky to work on a number of projects that I am passionate about. From my first press illustration for TDK, to branding Brixton’s Rough and Ready basketball tournament. I love type and lettering, and recently became a member of Letter Exchange, where I gave a lecture on the aesthetics of graffiti art to a mixed audience of lettering professionals, friends, and family members, most of whom had no idea of my ‘creative past’! In commercial terms, I’m very proud to have led the rebranding programme for  international law firm Hogan Lovells. I had already completed a number of similar projects for other companies, but the scale of the project, spanning different teams and countries made the project rewarding.

Through my company Mindspray, I want to expand my work as a facilitator and consultant to build sustainable links between education, vocational training and business. I’m passionate about collaboration and exchange, and would love to create a global initiative that drew both culture and commerce together.

Cornbread, Iz, Blade, Barbera 62 & Eva 62, Stay High 149, Tracy 168, Seen, Kase 2, Phase 2, Lee Quinones and Dondi are among the many important figures and pioneers of graffiti culture. Colin Brignall and Dave Farey – for Letraset! What more can I say? Tony Messenger, my tutor at Camberwell who allowed me to take a year out to follow my passion. Artists Simon Cooley and Rita Keegan were amongst the few practising artists to offer advice and encouragement as I swapped sable for aerosol. London’s hip-hop community during the ‘80s for doing things that I’ve never seen before. Or since. All the educators, academics, researchers and many others who have shared their knowledge and experiences with me. Too numerous to list here, all have helped to shape my understanding of cultures past and present, and deserve much credit.

I’ve just completed a creative campaign for the international charity Coaching for Hope, who use football to create better futures for young people in western and southern Africa. Supported by FIFA, HSBC, Hogan Lovells and nPower, the project will raise awareness around the challenges faced by young women and girls playing sport in South Africa, and aims to educate young women and girls about their rights to play football and remain safe when faced with discrimination and violence. By visiting townships and areas of high unemployment where the work is undertaken, my goal is to build awareness of the campaign and to extend the reach of the programme to other regions and countries where young women and girls face similar issues.

My Rock Stars: Volume 2, the first American solo show by Moroccan-born artist Hassan Hajjaj. The body of work produced for this exhibition is a continuation of Hajjaj’s ‘Rock Stars’ series, in which the artist portrays his close personal friends in the guise of ‘rock stars’. Taking his pop-up studio through Morocco, London and Paris, Hajjaj’s approach combines the spontaneity of street portraiture with the language of fashion photography, creating an image that simultaneously evokes urban culture and the haute couture of glossy magazines. Runs until 22 February at Gusford Gallery, 7016 Melrose Avenue, Los Angeles, CA 90038. For more info visit www.gusfordgallery.com

Albus is South African photographerJustin Dingwall’s solo exhibition made in collaboration with Thando Hopa. It explores the aesthetics of Albinism in contrast with the idealised perception of beauty. Albinism touches every ethnic group and is characterised by the insufficiency of melanin that determines skin and hair color. Rejected, prejudiced and discriminated individuals suffering from albinism in Southern Africa are likely to become targets and victims of physical attacks and mutilations. The project reflects the ability to look inside ourselves and re-invent norms of beauty. M.I.A. Gallery 1203 A Second Avenue Seattle, 98101 WA, USA. For more info visit http://m-i-a-gallery.com

Herbert Bayer’s Commercial Graphics, 1928-1938 is a special exhibition at the Bauhaus Archive dedicated to the work of the Bauhaus teacher – between his departure from the Bauhaus and his emigration to the USA. The exhibition showcases the commercial graphic work of Bayer during the Weimar Republic and in Nazi Germany, after his departure from the Bauhaus. With his work for Dorland Studio, Bayer continued to be one of the most successful and highest-earning graphic artists of the period. At The The Bauhaus Archive/Museum of Design, Klingelhoferstrasse 14 10785 Berlin Germany. For more information visit http://www.bauhaus.de

ONOMOllywood, a collaborative project by photographers Antoine Tempé and Omar Victor Diop of twenty images inspired by iconic moments from great American and European films. Cinema as a universal art form transcends barriers, be they geographic, cultural, or racial. Iconic scenes have influenced popular culture globally. ONOMOllywood reimagines these famous scenes set in the dynamic cities of Dakar and Abidjan where hotels become the metaphorical juncture. As crossroads, they represent forums where cultures and people from around the world co-exist and merge in a permanent cycle of reinventions and reinterpretations. Onomo Hotel Dakar Airport Route de l’Aéroport BP 38233 Dakar, Yoff, Senegal. For info visit  http://www.onomohotel.com

Jon Daniel is a London-based Independent creative director, designer and curator. For more information visit his website at www.jon-daniel.com or his blog at www.visual-intellectual.com.