The designs feature many of the characters breaking out of the perforated box so they look and feel ‘a bit like stickers’ says Interabang co-founder Adam Giles.

‘An extensive – and immensely enjoyable – research period spent watching the entirety of the TV characters’ output – and, in many cases consulting the show’s creators – resulted in the final chosen set,’ says Giles.

He adds, ‘We all agreed the images should be stills from the show, not something we created. And we wanted the characters to be engaging with the audience – looking and waving where possible.’

Each decade since the 1950s is represented in the issue and Bagpuss has been included as this year marks the 40th year since he appeared on television.

It is also the 50th anniversary of The Magic Roundabout, which starred Dougal, created by animator Ivor Wood, who went on animate Postman Pat and Paddington Bear.

The presentation pack has ben designed in a TV listings-style with a character biography, and features an essay on the golden age of children’s TV, with a commissioned illustration by Chris Kasch.

A medal pack, designed by Interabang, was produced in conjunction with the Royal Mint. The pack focusses on the work of Small Films, creators of Bagpuss and Ivor the Engine.

The minted medal features one of the characters on each side, while newly commissioned illustrations were provided by Peter Firmin – the co-creator of these characters.

Copy was provided by Daniel Postgate, the son of the other Small Films co-creator Oliver Postgate.

The stamps are available from 7th January here. 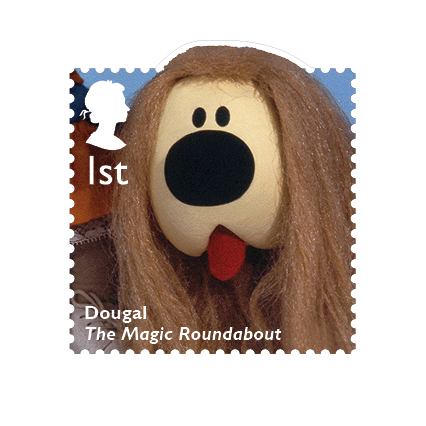 Designing for the internet of streams