An intricately woven, origami-style sheet of music is the latest addition to hang in New York’s Sebastian & Barquet gallery. The artist, Francisca Prieto, continues her work (albeit with a few paper cuts, we imagine), to meticulously cut, fold, and interlock paper into impressive forms of artwork.

Underscore was commission by Sebastian & Barquet after the gallery came across Prieto’s Between Folds series, in which envelopes had been knitted together to transform ‘the ordinary life of this overlooked piece of paper’, she says. The musical score piece was created for an antique frame from The House of Heydenrk.

‘It is great to have a piece exhibited in New York in such an exciting gallery and also a big compliment that it has been framed with such quality,’ says Prieto. 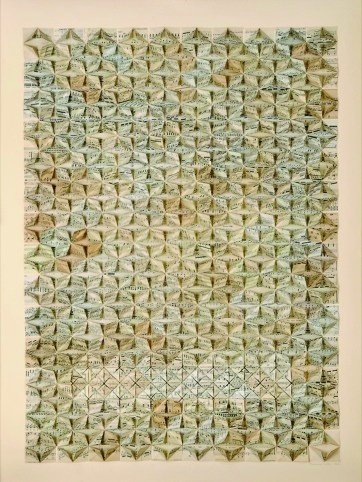 So far, the Between Folds series consist of folded envelopes, a deconstruction of the complete works of William Shakespeare (that’s 1300 pages) and old sheet music. It will be display in a forthcoming exhibition at London’s Jagged Art Gallery in November, along with a piece Prieto is set to finish, made out of the Illustrated London News of 1852.

Prieto is also hoping to complete the series with a collection of old maps. That is if she can make it big enough by the end of the year.