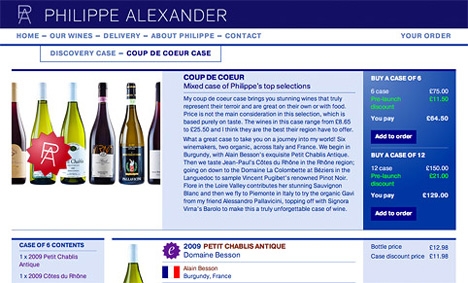 The site, which launches today, is a ‘pre-launch offers’ website, which will be followed by a full site at the same URL, when the store launches in September.

53k was approached directly in March and, according to designer and developer James Lefrère, sought to create an identity ‘which is straightforward and monochromatic, distanced from competitors and inspired by French Modernist design’.

Lafrère says the identity, which is ‘bold yet restrained’ feels ‘slightly reminiscent of the old Air France identity’.

The full website launch will see 70-80 wines made available and functionality will allow customers to ‘create cases in an intuitive way and browse wines,’ according to Lefrère.

Campaign materials and ads also designed by 53K will roll out with the website launch, initially targeting the Greater London area.

Voxpop – what is your favourite piece of data visualisation?