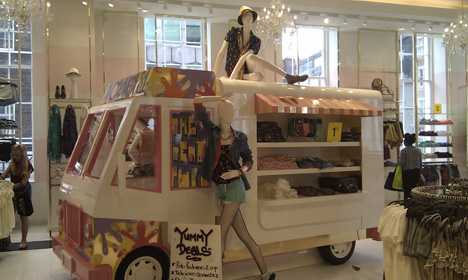 JT Nakaoka has created the designs for Forever 21’s US branches, and is rolling out these designs for the London store, which is located in the three-storey former HMV building on Oxford Street.

The UK and Ireland stores are project managed by MG Project Management, which oversaw the Forever 21 Dublin and Birmingham branches, which opened in 2010.

Ross Holland, MG associate and retail project manager, says, ‘The concept for the store is set in stone from the US. We introduced a couple of extra rooms which they haven’t used before – the glacier room and the kaleidoscope room.’

He adds, ‘We used a lot of ornate plaster work and timer, with stone walls and flooring. There are chandeliers and lots of decorative features.’

Forever 21 opens on Oxford Street today, and will be followed by a Stratford Westfield branch on 13 September.