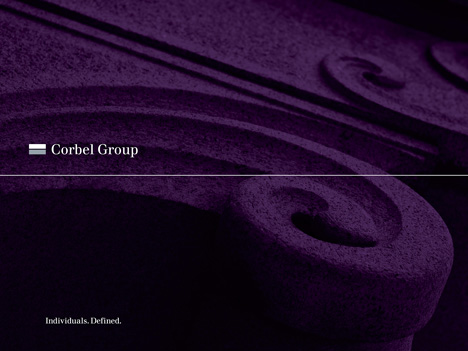 The consultancy was appointed to the project in January following a strategic pitch against one another group. It was initially appointed to rebrand Healy Hunt, and in March, following the announcement of the merger, began work on the creation of the group identity.

The name Corbel Group was chosen, as Corbel refers to a support used in architecture, aiming to represent the individual companies within the group that ‘provide strength and support.’

Daniel Fernandez, Greybox creative director, says, ‘The identity had no consistency – it lacked personality. Their offering is quite boutique, so we polished the identity and looked at positioning to give them a bit more personality.’

Greybox created a new look and feel for the brand, including the tagline ‘Individuals. Defined.’

It used a ‘rich aubergine colour palette and sophisticated typographic solution’ for the identity, which will be seen across all touch points including online communications, stationery, marketing materials and a brochure, which will launch in a few months time.