Italian visual artist and film-maker Quayola is currently putting the finishing touches on a collaborative audio-visual spectacular due to hit London in the middle of next month. 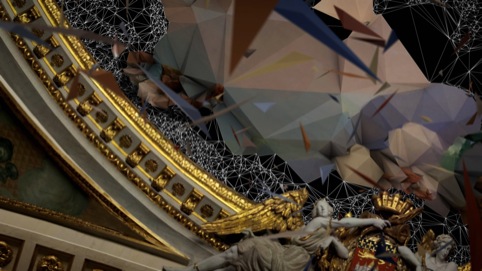 The one-night-only performance, called Structures, is a collaboration with Jamie xx – one third of Mercury Prize-winning band The xx – who has also proved successful flying solo after a masterful re-working of hiphop legend Gil Scott Heron’s first album in 13 years, I’m New Here, earlier this year.

The project is the first of Rizlab Experiments in Music series, which has been launched to allow musicians the opportunity to develop innovative audio experiences, and team up with other creatives that have caught their eye. Jamie xx was intrigued by Quayola’s geometric, real-time visuals exhibited at the likes of the V&A, Venice Bienalle and the Royal Albert Halll and the pair began the collaborating on the immersive four-hour set just over a month ago.

Structures is an experiment using the custom-built software Partitura, created by Quayola with friends and collaborators Pedro Mari and Natan Sinigaglia, the visual music artists known as Abstract Birds.

Partitura generates real-time animations which aim to visualise sound, along a horizontal linear structure, much like a musical score. The ever-evolving linear structure morphs and changes following a coherent system of different types of geometric structures controlled by data gathered from the music.

Quayola says, ‘The idea was to build a coherent system that visualises sound through abstract shapes and geometry from the music itself.’

‘The audio data is analysed in real time but it can’t just be left to work on its own, it’s a lot more complex than that. It can be operated like an instrument in itself, using midi disk sliders and custom interfaces.’

Quayola likens Partitura’s process to traditional methods of character design and animation. He says, ‘With character animation you create a system of geometries, a skeleton or rig that governs all characters and then on top you attach clothes, muscles and hair. But instead of a human skeleton we create a structure with lines, rigs which control the movement on top of which we can layer geometries, textures, etc.’

‘The software is a vision of how to visualise music, a system of language of its own. But obviously there’s no narrative structures other than the actual music. At the moment we’re working to plan a narrative and a visual journey.’

The performance, which will take place on 11 August at a secret London venue, will involve an immersive environment of two 17m screens enveloping the audience. Quayola says, ‘We don’t want the music and the visuals to be seen as two separate things. It’ll be like these large digital structures will be producing the sound.’

Structures will take place on 11 August in London, for more information on how to get tickets visit www.rizlab.co.uk