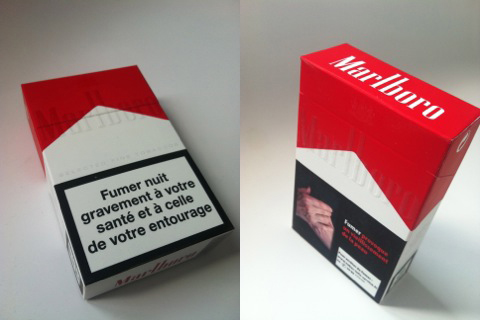 The new look is understood to have been created by a French consultancy. It is rolling out in France and the rest of Europe and understood to be coming to the UK shortly.

The Marlboro logo has been modernised and no longer appears on-pack in black. Instead it features on white reversed out of red on the lid, in red on the bottom, and also on the flip-top so that the consumer has to ‘break open’ the brand.

The packs retain the Marlboro brand’s recognisable red chevron. The red has been deepened in tone while the white has been made brighter and a matt finish added.

The pack complies with French health regulations that require 50 per cent of the pack’s surface to be given over to health warnings.

The redesign follows a change to the Marlboro tobacco recipe and the launch of the ‘Be Marlboro – don’t be a maybe’ campaign.

The on-pack claim has changed from ’20 Class A Cigarettes’ to ‘Selected Fine Tobaccos’.

The redesign comes as the UK’s Department of Health has unveiled proposed ‘plain’ cigarette packaging, which will be used if regulations on tobacco packaging pass into law.

These designs use grey Helvetica and a ‘drab brown’ colour palette and stipulate that the brand name can only be shown once on each of the front, top and bottom surfaces of the pack.

Marlboro owner Philip Morris says its redesign in no constitutes a move towards plain packaging.