Covering graphic art, typography, and illustration, his work has seen him win clients including Liberty, Penguin and the V&A, and his most recent project to launch is a collaboration with business card brand Moo that offers the people of London ‘complimentary compliments’.

These are shown on free flyers that have been posted up on walls on London’s Southbank today, with passers by invited to take one and brighten up another’s day with a slips expressing sentiments such as ‘you’re spectacular’; or ‘I think you’re awesome’.

‘The project is about making something that could be seen as disposable into a piece of art’, says Lowe.

‘The flyers are all hand signed, making something that so often is destined for the bin, into something to keep and put on the wall.’ 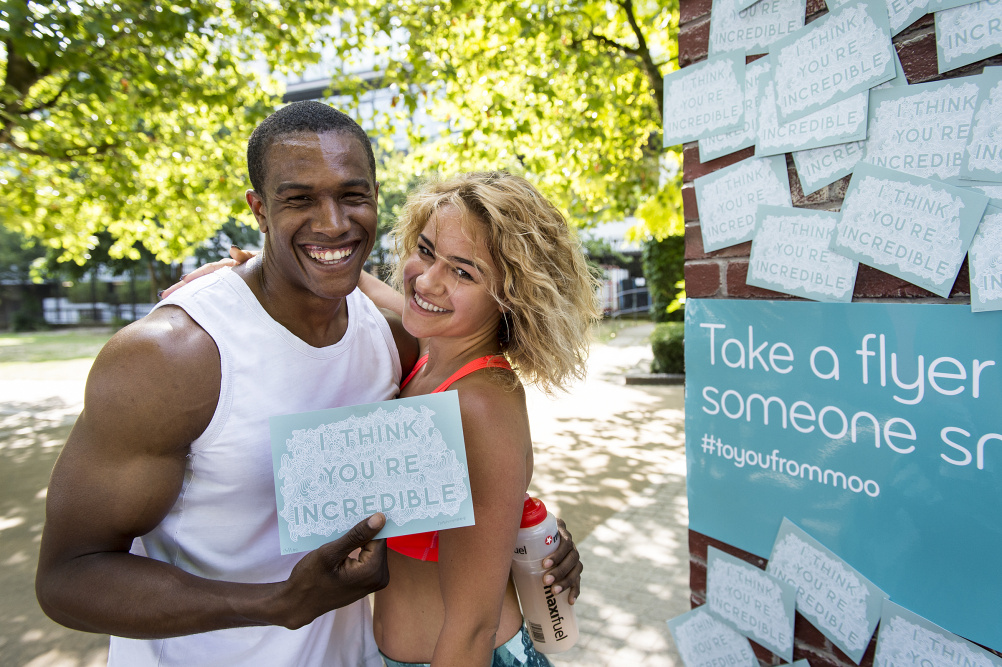 I had work experience at a printers when I was at school, I learnt a little bit about typography and design there and found it exciting. That was the first time I had any idea that I could make a living through being creative.

My first job was in a pork pie factory, but my first out of university was at a kettle factory in the Midlands. I designed the packaging and instruction leaflets. I even painted (badly) a pattern for the side of a kettle, it was called Autumn Harvest.

I’ve always done a variety of things. Right now I’m not art directing a magazine ­ the first time in ten years ­ so I have a lot more time to work on my art practice. It’s been great to have uninterrupted time to develop. I’m still designing, but not as much, and doing quite a few interesting illustration jobs. I’m also working towards two solo exhibitions in August so that is taking up a lot of my time.

When I first started I was still doing paste-up artwork on a drawing board. We used computers but not really for doing finished artwork. But really the biggest change has been the Internet. It has made working internationally possible. My own website was first noticed first by West Coast America, specifically the skateboard scene out there which directly lead to me working in magazines and eventually working for myself.

What is your favourite project, that you¹ve worked on?

Because I have so many disciplines I have lots of favourite projects. Anorak, ­ the children’s magazine I art directed for six years, ­ will always be something I’m proud of. But there are lots of others and, hopefully, lots more to come.

What is your favourite project, that you haven¹t worked on?

There is nothing specific but I would really like to have a chance to do film titles one day. I think there’s opportunity to do something really interesting. My love of type, simplicity, colour and movement could work really well in this context.

I’m not sure I think of anything in my career as being a mistake, it’s all helped to get me where I am.

To continue working on things I enjoy for as long as I can.

I didn’t really work with him but Ian Lorimer, the head of the national diploma in design and print I did pre-university, believed in me when I didn’t. I don’t think I would be doing what I do now without him. Unfortunately he died before I even finished university so I’ve never been able to thank him.

I have no idea what it would be like to start out in design now, it’s such a different world to when I first started. The basics always apply though: be honest with yourself, do it for love not money, find inspiration anywhere you can, ideally not the field you are working in.

For more on Supermundane visit http://supermundane.com/