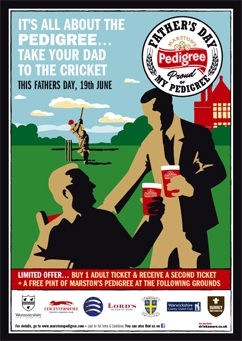 The consultancy created the visual identity for the campaign, which will be applied online, on point-of-sale materials, across printed collateral such as posters and postcards and on on-screen graphics.

Brand Voice has worked with Marston’s for ‘years’ in its capacity as the brand’s digital branding consultancy, according to Bill Wallsgrove, Brand Voice’s head of ideas. This includes work on packaging, visual identity, direct marketing campaigns and website design. It began work on this campaign in February.

Wallsgrove says, ‘We created the brief and took the idea to [the client.] We were trying to build the profile of Pedigree. Marston’s sponsor English cricket, so we linked the cricket promotion with celebrating your father – and his Pedigree.’

The look and feel of the campaign is inspired by 1930s regional railway posters. Wallsgrove adds, ‘Because it’s a regional campaign in different cricket grounds around the country I wanted something that had nostalgia, but also regionality. It’s a modern reference to the old style of poster. It’s a bit witty – it makes people smile.’