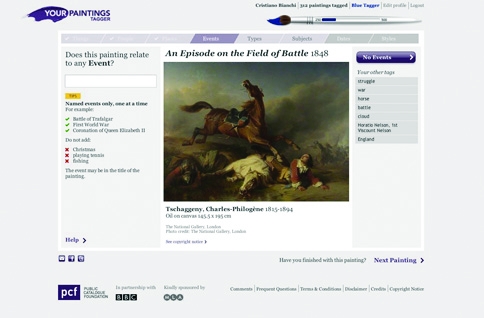 The site was created by BBC in-house designers, Kent Lyons, Numiko and Keepthinking. The project evolves from an eight-year nationwide photographic and cataloguing campaign by The Public Catalogue Foundation.

According to Conrad Easton, project manager at Numiko, Kent Lyons worked on the initial designs for the site, which Numiko – which was appointed in October 2010 following a two-stage tender process – finalised.

Keepthinking devised the database, currently holding 63 000 paintings, as well as new collection management software for the Tagger, a crowd-souring interface that allows visitors to add their own information to paintings. The same software powers Your Paintings.

Easton says, ‘There are 200 000 paintings in this country that the public own and people aren’t aware of it. We’re making those available online and encouraging people to visit the art.’

‘There’s a massive data set – you have to make sure the pictures are the focus,’ he adds. ‘Purple is quite striking, so we used that on the homepage and took it right through.’