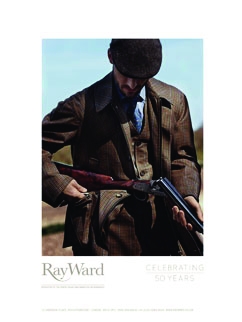 The consultancy started work on the campaign in March, having rebranded Ray Ward about 18 months ago, a project it won through a recommendation from a former client.

The campaign which launched yesterday uses the visual identity it created for the rebrand, but with a new 50-year anniversary lock-up icon and specially commissioned photography which was shot by fashion photographer John Balsom.

Ashley Hodge, team leader for graphics at Dalziel and Pow, says, ‘It was a natural progression from the work we did before to focus on the lifestyle aspect. We used a fashion edge to give a real uniqueness to the photography.’

Hodge says that Dalziel and Pow was briefed to create a campaign around the concept of ‘keeping it real’, setting the brand apart from its competitors. It retains the nickel and charcoal grey branding colours used for the identity.

He adds, ‘The campaign needed to feel real, so with the casting we looked for people that didn’t look too “modelly”, but still had a fashion edge as it had to feel contemporary.’