Artist Leo Fitzmaurice has spent the last 10 years collecting more than 800 cigarette packets from all over the world and flattening them out to produce these rather sweet ‘football shirts’. 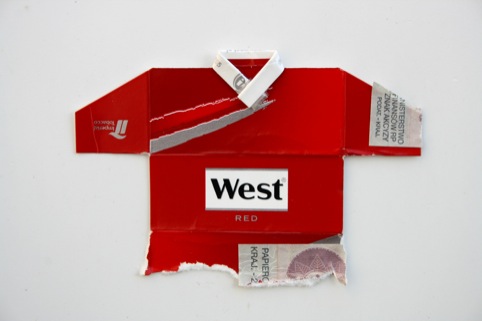 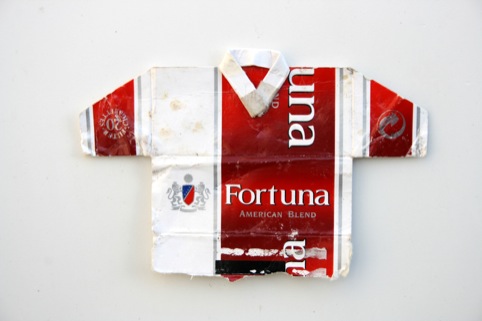 A satire on sponsorship, an inversion of the principles of design function or just a geeky affectation writ large, there’s something innately appealing about these mini-cardboard tops – the entire collection of which will be going on show at the Cube gallery in Manchester from next month.

Fitzmaurice says the concept for the football fag packets came to him on a wet afternoon – ‘In this kind of weather the glue holding the packets together dissolves and they tend to fall apart.’

Out walking in the rain, he came across a red Marlboro lid stuck to the pavement, ‘It was almost the finished item – the flaps folded out suggesting the arms of the shirt, Marlboro emblazoned across the little chest and the white V indicating a collar.’

The Marlboro shirt was the first in a collection that now includes cigarette tops picked up from pavements all over the world, the different brands suggesting different team sponsors or in some cases (Chelsea, Fortuna, Palace) existing football teams.

Fitzmaurice says he was interested in how the ‘shirts’ keep the energy of the design while removing the original function and message and the gallery blurb gets straight to the appeal of the work by noting that flattening cigarette packets into football shirts is ‘the sort of thing you might do in the pub’.

Leo Fitzmaurice: Post Match runs from 9 July-20 August at the Cube Centre for the Built Environment in Manchester.