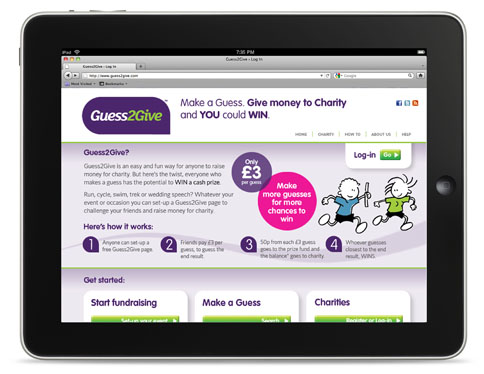 The consultancy was appointed directly in 2010 and asked to develop an identity, website and advertising collateral for the company, which LCD describes as a ‘sweepstake that fundraisers use to engage their wider network of friends’.

Fundraisers can set up pages on the site as individuals or charities for an event or an occasion, such as time taken to complete a run or swim, length of a best man’s speech or weight of a newborn baby.

Sponsors are then invited to pledge money to guess the result. Each guess is £3, with 50p going towards the prize fund and £2 going to the charity.

Early versions of the identity incorporated a question mark but instead a ‘stylised speech bubble’ was worked up – described by LCD creative director Ian Laing as ‘a lozenge with a corner’.

The brand and the website are expected to launch in the next two weeks in tandem with the announcement of the winner of Barclays’ Take One Small Step competition, which has shortlisted the business as a commendable business idea.