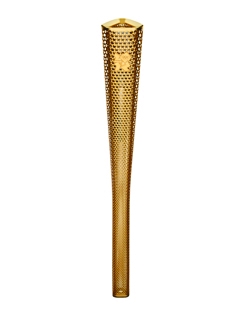 The gold-coloured torch is perforated by 8000 circles, which represent the 8000 torchbearers who will carry the torch on its 70-day relay ahead of the Games next year.

Lord Coe, chairman of the London Organising Committee of the Olympic Games, says, ‘Integral to the design are the 8000 circles, a lasting representation of the torchbearer stories of personal achievement or contribution to their local community that will be showcase with every step of the relay.’

Barber Osgerby says the torch’s design has been inspired by the ‘multiples of three’ that are found across the Olympics – including the three words in the Olympic motto: faster, higher, stronger.

Crafted from an aluminium alloy, the torch weighs 800g.

Edward Barber and Jay Osgerby say, ‘Ever since we were young we have loved the Olympic Games. As designers, this is quite simply the best project going: to design an icon for the Games. We’ve wanted to be involved since July 2005 when we were celebrating winning the bid with the rest of the UK.’

They add, ‘We have worked hard to develop a torch that celebrates the relay and reflects the passion for London and the Olympic Games. We wanted to make then most of the pioneering production technologies and to demonstrate the industrial excellence available in the UK – it’s a torch for our time.’

Barber Osgerby was appointed to the project in March by Locog. The consultancy was selected following an international tender launched by Locog and the Design Council last year.

The consultancy will also design the celebration cauldrons, which will hold the torch during lunchtime and evening stops. Thomas Heatherwick has been appointed to design the Olympic cauldron that will house the torch at the Olympic Stadium site.