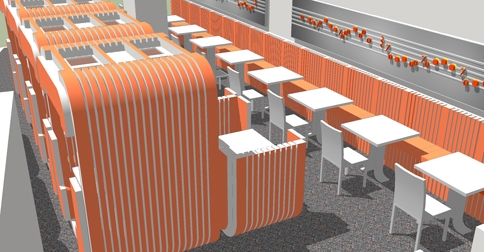 The original design for the restaurant, which first opened 12 years ago, was created by Stiff & Trevillion. Man & Man has taken over the project, having been appointed to design all outlets under the Royal China Group umbrella company, which owns Satsuma.

Man & Man was appointed for the work following a pitch involving both creative and credentials proposals in autumn 2010, according to a Satsuma spokeswoman. Work began on the project in December.

The spokeswoman says, ‘Satsuma’s been open for 12 years and hadn’t had any refit. They wanted to refocus for the London market and look at where the brand was going.’

Man & Man is redesigning all interiors, interior graphics and signage, and collateral including menus and uniforms, though the exteriors will remain largely unchanged.

The interiors will retain Satsuma’s grey and orange colour palette, and will feature MDF cube pod seating with slatted walls and windows in the roof to allow in subtle lighting.

The floor-to-ceiling glass front will also be retained, and the 100 small elephants – thought to bring good luck – will remain placed around the restaurant.