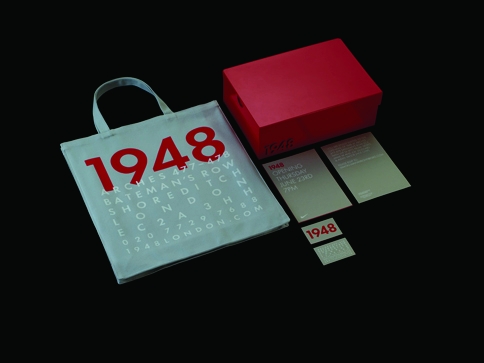 The architectural and interior design work for the space, which operates as a retail, experiential and events base, has been carried out by Nike’s in-house team.

Hotel Creative was approached directly by Nike to work on the project after having previously worked alongside the sports company.

The consultancy has created branding and stationery for the space, including business cards, tags and bags.

Hotel Creative’s creative director Mitch Crook says, ‘We wanted to keep the old-school Nike brand but give it a modern twist.’

He adds, ‘A lot of the space is exposed aluminium and so we adapted the original colour palette of red, white and black to red, white and a cool grey colour.’

The general approach to the project was to create the feeling that the 1948 space was its own boutique store, rather than a Nike outlet.

The space, due to reopen on 23 June, will feature room for retail, experiential and events space as well as a library.