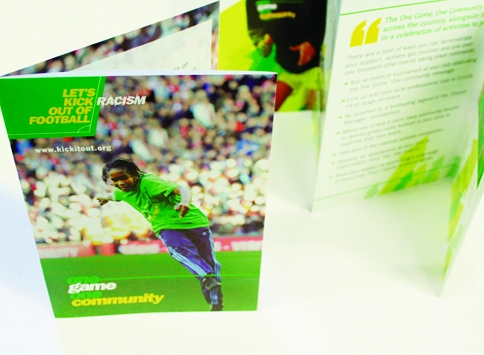 The consultancy was approached to create the campaign materials in early May, having won a tender to design the Kick It Out 2010 Annual Report last autumn.

The report document aimed to ‘set a new design standard for its communications tools’, and informed the design of the 2011 campaign materials.

Ellie Thompson, graphic designer at Sherry, says, ‘With the Annual Report, it was about getting a fresh approach. It’s already got a strong brand identity, font and colours – the green, yellow and black – so that was the toolkit we worked with.’

Sherry designed a new secondary font and tweaked the look and feel to make the report and 2011 materials distinctive from previous campaigns. It created a concertina-style leaflet that aims to create to create ‘instant visual impact’.

Thompson says, ‘We wanted to maximise their photo image library. The picture of the child kicking a ball was really impactful, so we rolled it out across the whole thing to visually lead you through the content. It’s emotive – it’s about getting people involved.’