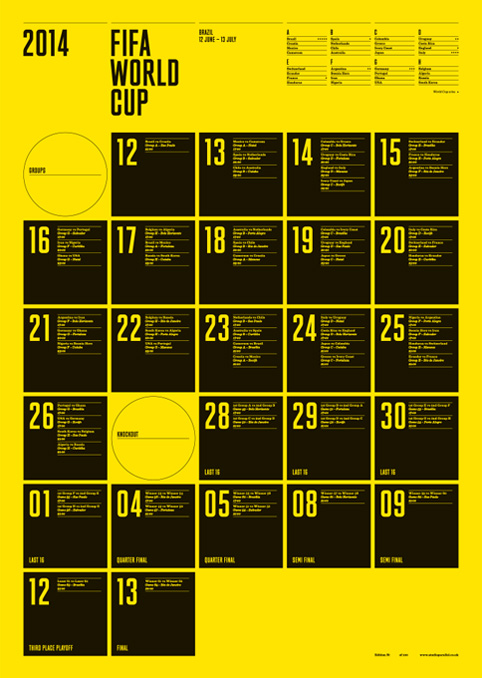 Parallel has designed this bold yellow and black screen printed World Cup wall chart, which according to creative director Paul Fox ‘takes its influence from the classic 60′s calendars by Massimo Vignelli.’ Matt Willey’s MFRED typeface has been used for the numbers and the headlines. 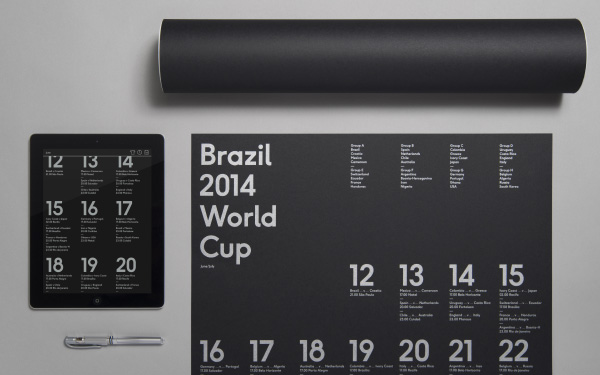 Karoshi has designed this black and silver World Cup wall chart – which mercifully came with a silver pen – and it has also been made in digital form if that’s all a bit too analogue for you. 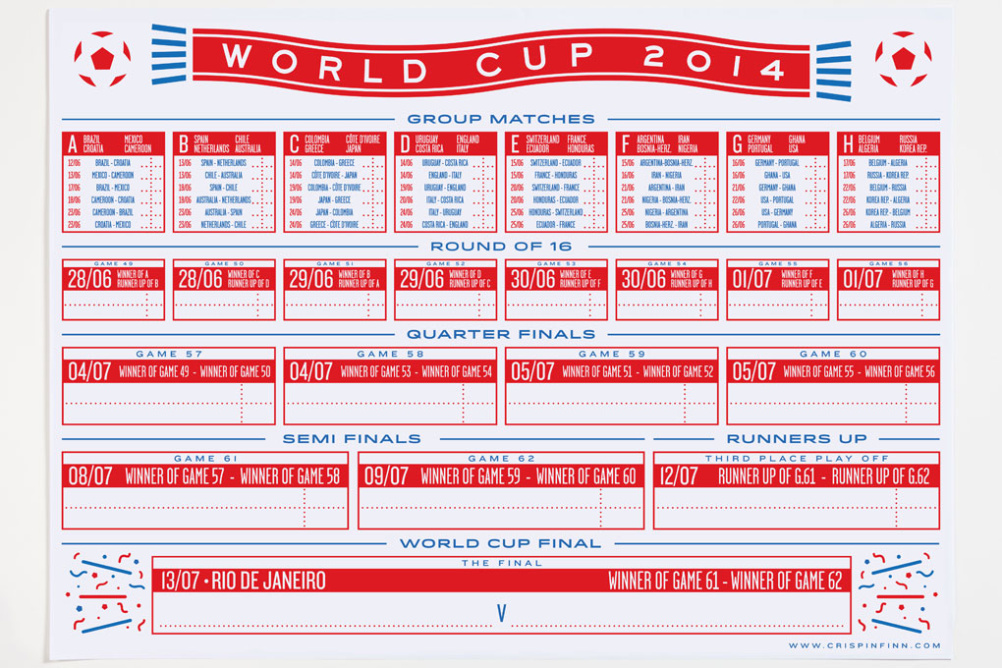 Here’s Crispin Finn’s take on the World Cup wall chart in their signature red white and blue. Although Crispin Finn have themselves sold out of the design, the people of Beach have got a few left. 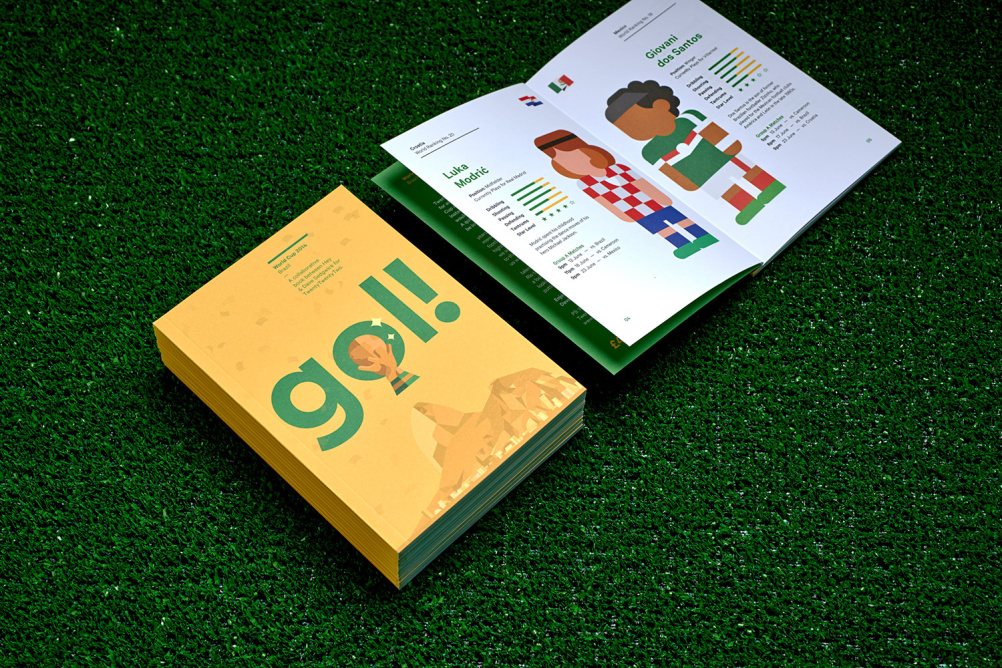 An accompanying exhibition, Hey, will feature the images seen here in the book which shows player illustrations from each of the tournament’s  32 teams.

Marmalade on Toast has added some digital wizardry to the traditional sweepstake format with this multi-device sweepstake generator Shuffl. Here’s how it works:

Creative Nation and independent creative director Jon Daniel has branded The Art of Futebol for the ABC Trust, which has engaged Brazilian legends including Pele, Ronaldo and Romario for the project that will see footballs signed by the players, made into artworks by the likes of Pure Evil, Inkie, and Jimmy Galvin. 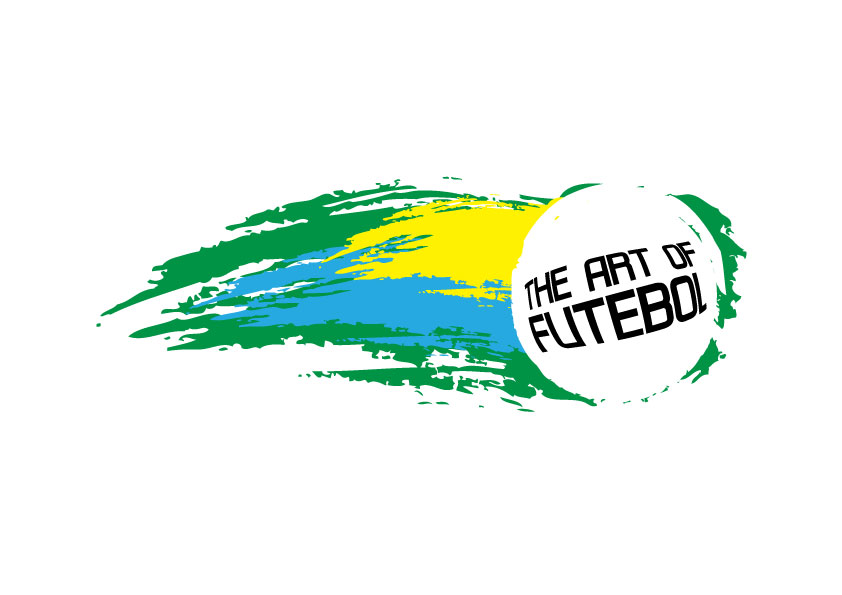 First is First by Freelance designer Simon Ford looks beyond the World Cup to classic international matches past and present, representing them with their national colours. Even the poster tube labels are rather nice. 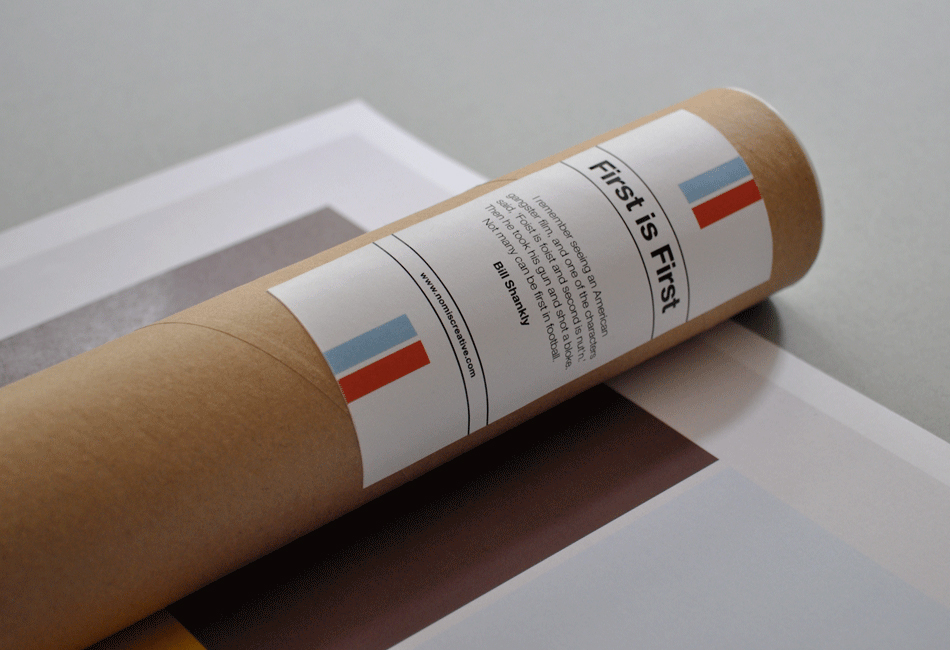 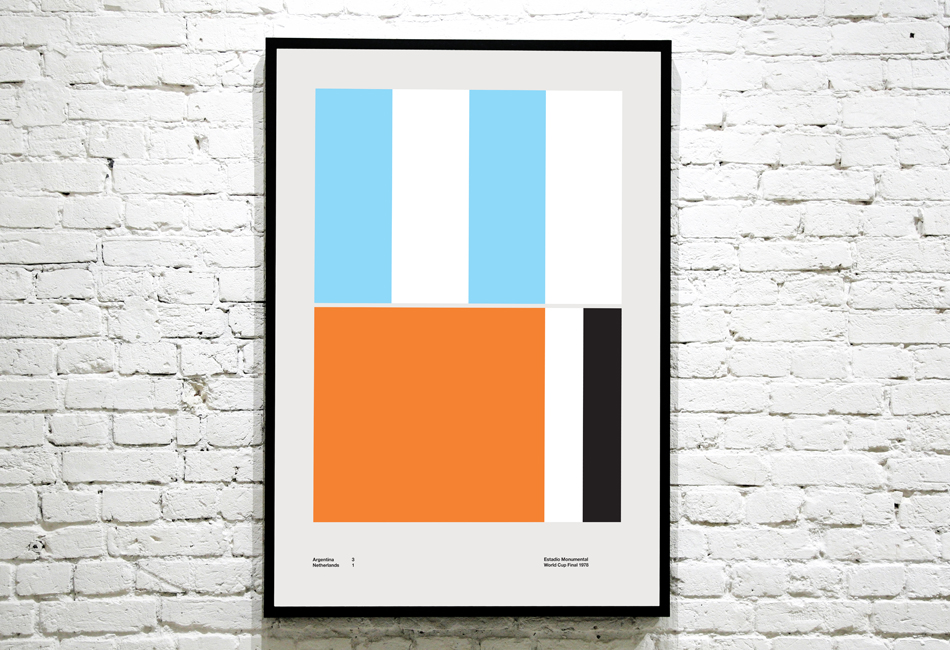 Fiasco Design has created an interactive World Cup calendar which features info on every game as well as trivia and tournament history. 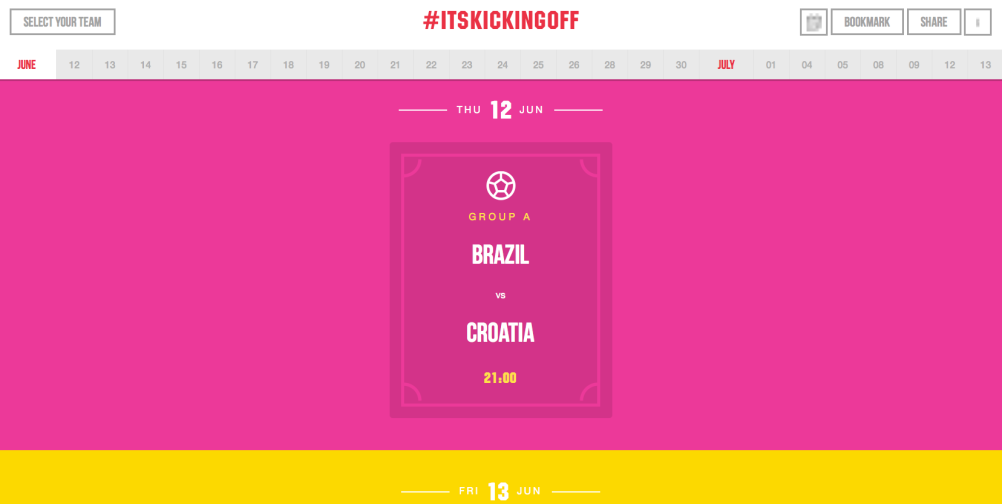 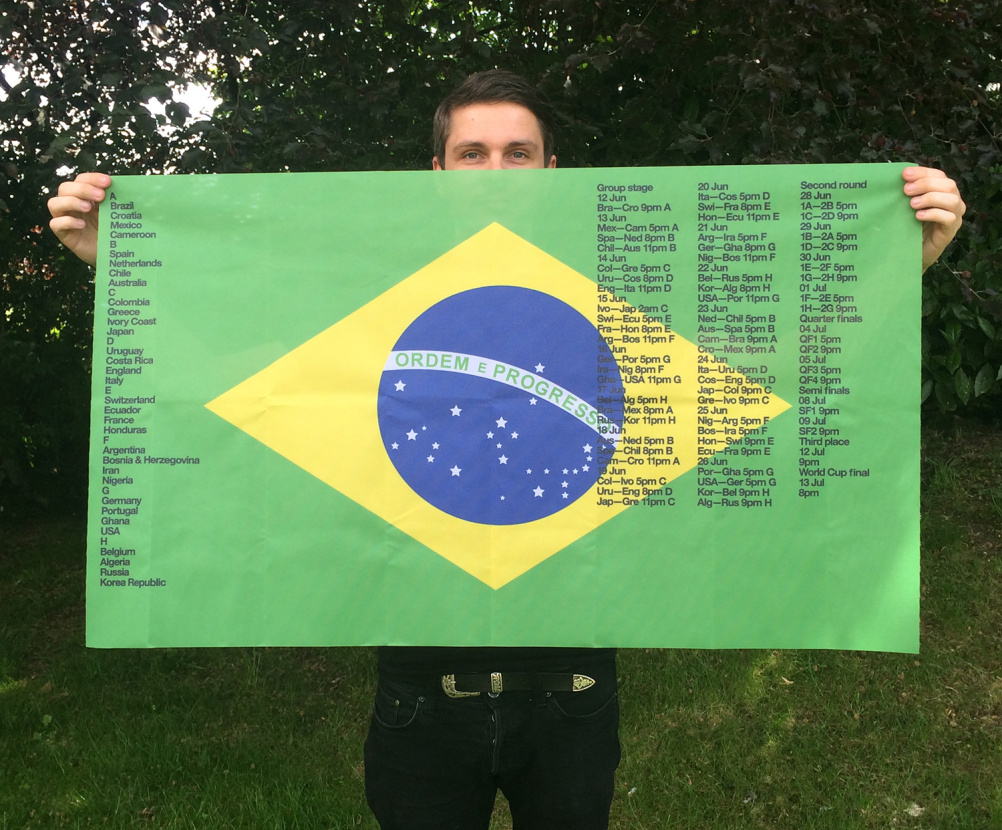 Uniform is inviting creatives from each country represented in the World Cup to create a piece of artwork inspired by each game their team plays in the tournament. So far designers and consultancies involved include Joao Peres, Apple, for Brazil; Lance Wyman, USA; Sam Byrnes, Dragon 76, Japan; and M&C Saatchi, Australia. Head to www.326490.com to get involved. 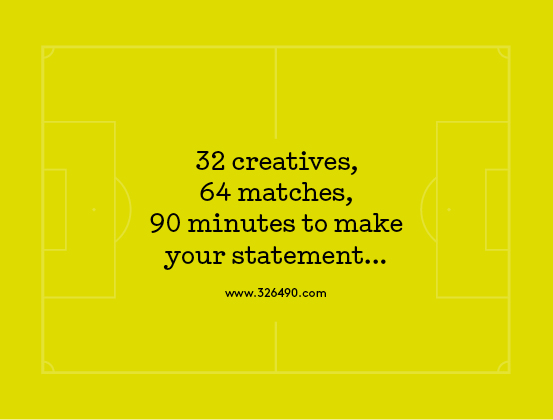 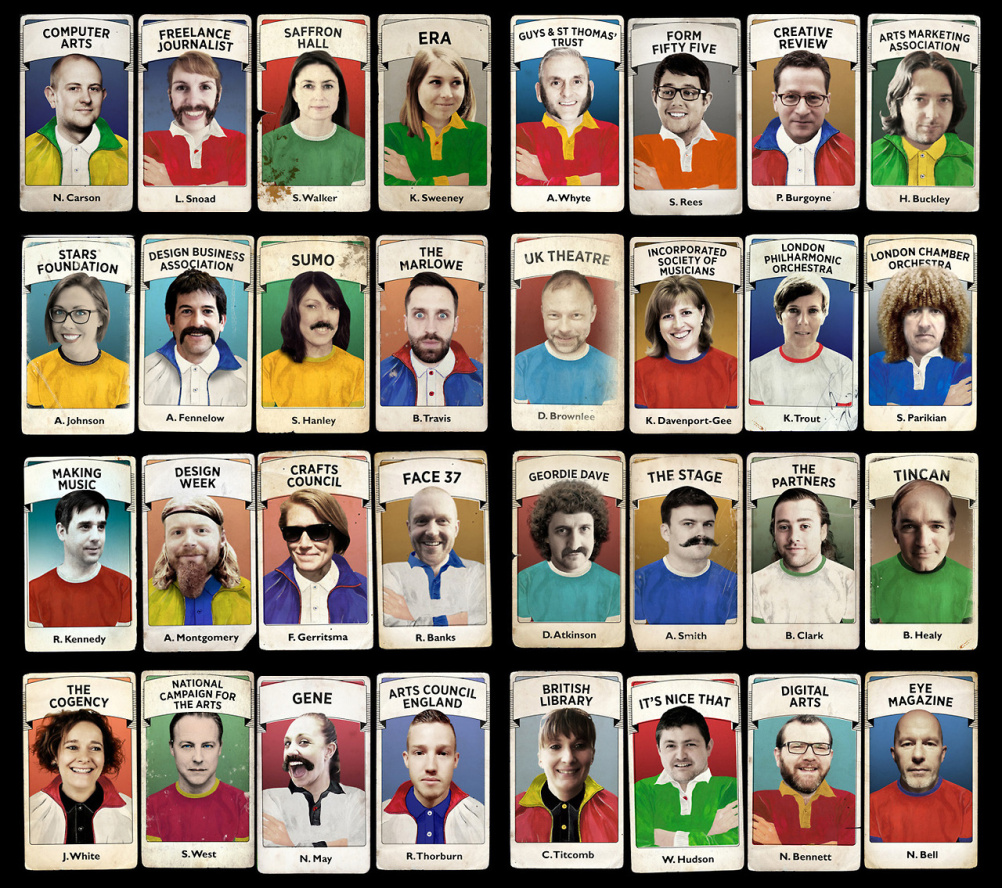 A new look for the Royal Academy’s membership scheme