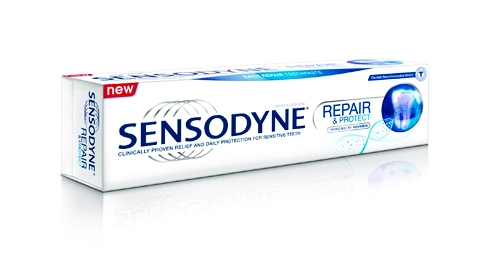 The consultancy is GSK’s preferred design partner and its appointment to this project follows packaging refreshes for Sensodyne’s Rapid Relief product, which launched in July, and its core range, which rolled out at the beginning of the year.

The holographic images give the illusion of depth and have been produced using Fresnel lens technology, which Blue Marlin claims is the first time the technique has been used by an oral care brand.

Fresnel lens technology is based on technology developed by French physicist Augustin-Jean Fresnel for lighthouses in the early 19th century.

According to the consultancy, this approach is a device to illustrate the benefits of the product, which can form a ‘protective tooth-like layer’ over sensitive teeth.

‘The holographs make you want to pick up the pack and run your fingers over them,’ says Blue Marlin creative director Chris Hart.

New Ideo consultancy to use design to tackle poverty

The inventor of the album cover