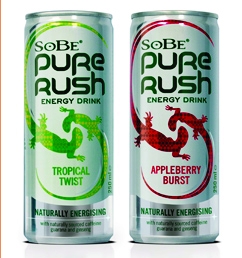 Blue Marlin was appointed by So Be, which stands for South Beach, for the project in June 2010, having worked with Britvic, which has exclusive bottling agreements with Pepsi, for the past 11 years.

It features a graphic of two entwined lizards, which have been the icon of the South Beach Beverage Company since launch in 1996. An infinity symbol aims to emphasise the energising properties of the drink, while an iridescent finish aims to create on-shelf standout.

Blue Marlin creative director Simon Pendry says, ‘We’ve made the pack more single-minded and really brought the lizards to life. The South Beach ethos is all about being comfortable in your own skin and the new packaging reflects that, it has a relaxed confidence.’

After the seeds settle

The Forest identity reconnects football to its grass roots