Opening next week at the new All Visual Arts gallery in London’s Kings Cross is Bound, a show that looks to be as terrifying as it is beautiful.

Artists Alice Anderson and Kate MccGwire have each created a monumental sculpture, specially commissioned by the gallery. These immense pieces aim to reflect the fears experienced during childhood about attachment; reducing the viewer to a tiny onlooker, dwarfed by the sheer scale of the works. 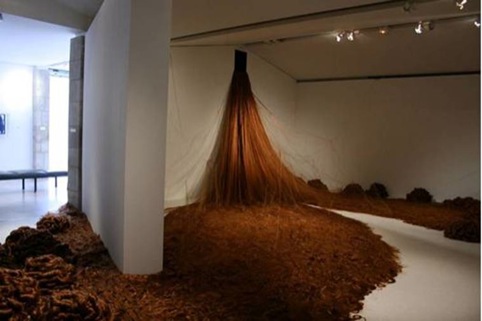 Anderson’s Fort-Da is an enormous bobbin, swathed in ropes of red dolls hair.

The title of the work is a reference to Sigmund Freud’s observations of his one-year old grandson, who would compulsively throw and retrieve a wooden reel on string, repeating the words ‘fort’ and ‘da’ (‘gone’ and  ’there’ in German).

Freud took this to demonstrate the boy attempting to quell his anxiety at his mother’s absence; and so Anderson’s dolls hair round the bobbin symbolizes her attachment to her own mother. 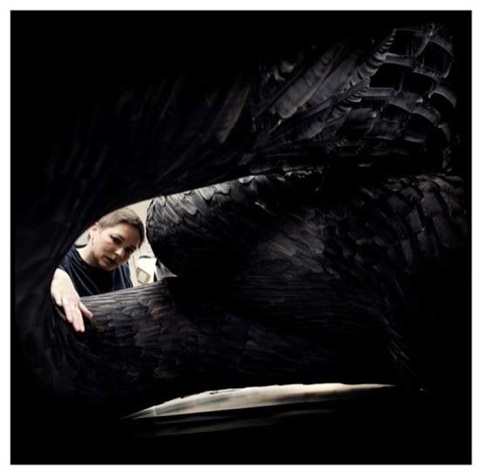 Anderson says,  ’I remember the terrible fears I used to have as a child left alone at home for many long hours waiting for the return of my mother. At that time I invented rituals for myself to calm my anxieties.

‘These rituals consisted of undoing the thread from seams, which I would wind around parts of my body and other objects. This obsession became so bad that I started to do the same thing using my hair. I guess it was a way of connecting my body to the world.’

The other work in the show, MccGwire’s Corvid, is equally unnerving and powerful.  Her sculpture is created from crows’ feathers, referencing the crow’s connotations with paganism and the supernatural.