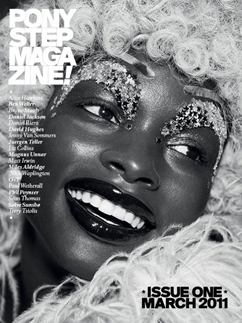 The magazine launched at the close of Paris Fashion Week last night.

Appointed directly in October 2010, Foxall developed a brief with Ponystep brand-owner and journalist Richard Mortimer to develop a ‘direct and humourous’ look for the magazine, according to Foxall co-director Andrew Foxall.

Foxall then sought to design the 320-page biannual magazine as ‘an unapologetic celebration of print’, which can be understood in three sections, ‘front, middle and back of book’, he says. Stylistically, he describes it as a ‘new Face magazine’.

Advertising is found at the front end, features in the middle – with some running up to 20 pages in length – and fashion images at the back.

Foxall says he believes too many magazines are taking ‘the art-catalogue root’ and are over-reliant on ‘beautiful type’. He says Ponystep will be more ‘energetic and advertiser friendly’.

The art of food

New Ideo consultancy to use design to tackle poverty