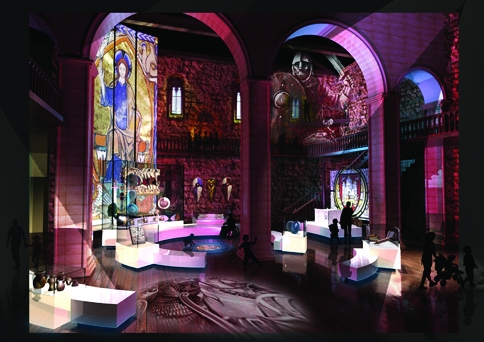 Appointed by the Norfolk Museums & Archeology Service in November 2010, the consultancy was tasked with designing a creative vision for the new exhibition Norwich Castle: Gateway to Medieval England, to tell the story of medieval life in East Anglia.

The Bigod Arch – the entrance to the keep – will feature a projection that colours its detailing, in reference to painted medieval arches.

Display cases will house the British Museum pieces and there will be projections and audio-visual interventions to tell the stories of medieval characters.

The throne room, guards room and kitchen will be dressed as medieval spaces and include objects from the period.

In almost 1000 years, the castle has had many uses, including a Victorian prison. It also houses a World War II roll of honour, which PLB will look to give a ‘reflective chapel feel’ by cordoning it with stained glass, according to PLB creative director Jamie McCall.

McCall promises to ‘maximise the impact of the building itself’ and will create ‘a strong design aesthetic’ in an ‘object-rich’ environment.

PLB, which is working with a client team and in association with the British Museum, expects the project to be delivered in about two years.

Populous shows changing signs of the times in Stratford