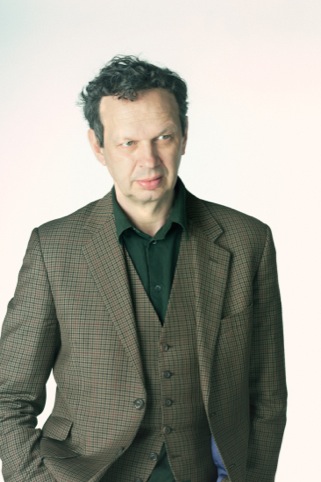 Design Week: What will you be doing at Milan this year?

Tom Dixon: Well where we’ve taken over the Science Museum again so that’s a monumental undertaking itself, because we’re not only showing our own things but looking after another 20 or so exhibitors. We’re collaborating with Adidas on a series of bags – the idea is ‘what goes into a bag for a week in Milan’, so it’s very tightly packed, in a way I have never managed to achieve in my personal life. I’m also launching seven sets of ‘newness’. There’ll be a lot more furniture than in recent times. I’ll also be showing the Eclectic range of accessories, which I don’t really show in Milan.

DW: Tell me more about the Tea House [In Tom Dixon’s space, they will be serving British High Tea in his new Eclectic Form Tea Set]

TD: The thinking behind it was that the collection is called Rough and Smooth. The Tea Room symbolises the ‘smooth’, because a British Tea Room is all polished and sophisticated. The ‘rough’ is the warehouse back-of-house-area that you walk though. That’s something we’re very involved with – the logistics and development – we’ve always been very interested in that. So you walk out of that into the public British end, which is represented by a poncy Tea Room.

DW: From what you’ve seen, what do you think this year’s Milan will be like?

TD: A lot of people are struggling in the classical furniture trade. A lot of Italian companies are suffering lot from the unstable environment in Europe and I think that’ll be compensated for in terms of larger global infrastructure looking to make some noise in a much less furniture-centric environment. Renault has collaborated with Ross Lovegrove on a concept car, and I’ve seen Nokia involved, so the ‘megacorps’ are moving in using it as a space to appeal to audiences other than their core audience.

DW: How do you think that impacts on the fair and on designers?

TD: I think it’s got to be a positive thing that design and product design are seen as a means of communicating stuff. It’s only annoying more in the cost of the hotel rooms. Every product designer worth his salt will want to meet a product designer from Korea, or somewhere else in the world, so it’s more international and diverse but the world changes and evolves. It’s so easy to moan about things – but [international collaboration] is the nature of what we’re supposed to be talking about.

DW: So who are you collaborating with this year?

TD: We’re working with Megaman [LED lighting specialists]. They’re a very good example of [that sort of collaboration] as they’re Hong Kong and UK based but until recently wouldn’t have considered Milan as a place to launch something as scientific as low-energy lighting. So it’s a symbol of Milan as a platform for broadening the appeal of lighting.

DW: How are you working with Megaman?

TD: My objective in all of this is to work in partnership to understand the rapid evolution of low energy lighting myself. If you go to supermarket and look at the vast array of different low energy possibilities you have to be a scientist to figure it out, but as an interior designer it struck me as an opportunity to try and simplify people’s perceptions of low energy. It’s all too rare for us as designers to have a new technology to play with. It’s a really interesting time for lighting in general so it’s really nice to be paired with a ‘mega company’.

DW: So what do you think of the Milan fair generally?

TD: We’ve shown there for the whole life of this company, and before that with Habitat. It’s turned from being focused quite heavily on Italian designers (though it’s always been very international) and being very much a trade fair to a carnival of everything related with design. Now it’s not just furniture but also electronic goods. It’s become the biggest design meeting in the world. As a result, it’s really the only chance you get to see everybody in one place – so it might mean press people or a dealer from a province in China or an obscure manufacturer I’ve been trying to meet for ages. For new design talent it becomes a shop window, but it also becomes harder and harder to make an impact.

DW: So how do you think people can make sure they stand out?

TD: I do think the cream rises to the top. In a hyper interconnected world if you do something interesting people know about it. People often complain about the visibilisty and being in the right location but people will get to know what you do if you surprise them constantly – then you can stand out.

DW: How do you think Milan has changed over the years?

It used to be  more to do with buying and selling and less of that goes on. I don’t think much trade goes now now –  it’s more a marketing fest or a design holiday for a lot of people like car trend people or photo journalists.  But it’s interesting, a lot of people don’t seem to really know why its there.

DW: How do you think it links to London Design Festival?

TD: The problem with LDF is with a town as big as this, and with the amount of subjects, it doesn’t really have a centre as a proper trade fair. There’s 100% Design, but not on the scale of a Milan trade fair. In terms of a design festival in general LDF has learnt a lot from Milan but London is always going to be a very different city. There’s a lot of diverse home-grown talent in the city, and they’re trying to get new media and architecture in too, so it has a very different focus. But it just doesn’t have as much serious trade underpinning it, and there’s a lot less manufacture. It has as many new young ideas and a lot more diverse people but it will never have the critical mass of half a million people going to a trade fair.

Pick Me Up returns