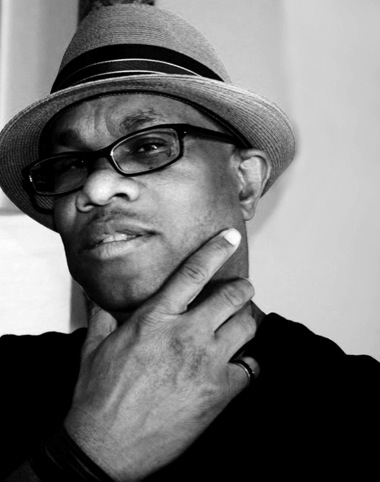 Michael Thompson, AKA Freestylee. Jamaican graphic designer and founder of the International Reggae Poster Contest. His website is at www.freestylee.net.

I am Jamaican by birth. I left for the United States in 1990, and worked as a freelance graphic designer with companies such as Citigroup, Sanofi Aventis, Bank of America and Estée Lauder. I am also a Creative Activist, using social design as a tool for awareness on a number of international concerns and solidarity. I am the founder of the International Reggae Poster Contest; a visual arts celebration of the positive impact of reggae music globally, and a platform to present a vision to establish a Reggae Hall of Fame in Kingston, Jamaica. I have had a number of international exhibitions of my Freestylee work; one-man show and group exhibitions.

How did you get started in design?

I studied graphic design at the Jamaica School of Art. After finishing my studies my first work was in a small screen-printing operation operated by a Rastafarian by the name of Jah Ned. There I learned to experiment with simple silhouetted graphic design concepts suitable for screen-printing and poster art. It was after winning a poster contest to Cuba that I had a break and was hired as an apprentice with the Daily News newspaper in Jamaica. This was a big step closer to what I wanted to do: layout and design. In the mid ‘80s, I was offered a job at Paisley Kelly Kenyon & Eckhart Advertising in Kingston, Jamaica. Many years later, I joined a public relations firm Mike Jarrett Communications, also in Kingston, as an Art Director. My activist poster designs started in the late 1970s. My first activist poster was created after an incident in Jamaica called the “Green Bay Massacre”. This took place 5 January, 1978, where a number of alleged young gang members from a poor inner-city ghetto in Kingston were lured to a military firing range outside the capital where they were ambushed and executed by the Jamaica Defense Force soldiers. Back then, I had no computer so it was strictly hand-painted acrylic on poster paper. My recent episodes of creative activism started about 2008. I began the journey of Freestylee, Artist Without Borders, a new phase in my awareness activism.

As a young designer just completing art school and without job experience, it was not easy to find positions in Jamaica as a graphic designer or as an illustrator. I had to make connections and work my way through the hurdles by constantly improving my portfolio and finding other opportunities, and use this process to learn new things that later on I could apply to my creativity process. In 1978, I entered a local poster competition and won a place on the Jamaican delegation to the 11th World Festival of Youth and Students in Havana, Cuba. You can imagine the jubilation at the time. This was a massive event with youths from many countries participating in political and cultural activates. I entered again in 1982, and won another place, this time to Moscow, the 12th Festival of youth and students. These competitions and trips further sparked my interest in poster art. The colourful silkscreen and lithograph posters I saw in Cuba, created by ICAIC (Cuban Institute of Cinematic Art and Industry) and its sister offshoot OSPAAAL (Organization in Solidarity with the People of Africa, Asia, and Latin America) made a tremendous impact on my work. If you are familiar with Cuban poster design you can see the influence in my Freestylee posters. It was an exciting and important time for me. The poster competitions and visits to Havana and Moscow created opportunities and opened doors for me in Jamaica, due to the exposure and publicity my works received. Moving to America I had to make new connections and start the process all over again. I had no computer skills to be a designer so I ended up designing T-shirts the old fashioned way for a small company called Wet Paint, in NYC. I later bought a computer and taught myself how to use this new technology.

Who are your greatest inspirations and influences?

My source of inspiration can come from anything or anywhere. Everything around me comes into play by keeping an open mind. My work has been influenced by a number of artists, designers and events. The influences do not materialize from any one source. My visit to Havana exposed me to the works of designers in that country and the fine art of poster design. This was an amazing cultural experience that had influenced greatly my design aesthetics. Some of the Cuban designers who greatly influenced my own art are names like René Azcuy, Fabian Muñoz, Nelson Ponce and Eladio Ravidulia. Other contemporary socially conscious artist on my list are JR, Ai Weiwei, Banksy, these are the people I admire for the activism as well as their artworks as well. I also admire the creativity of Greek illustrator and designer, Charis Tsevis, Japanese artist Takashi Murakami, love his fun colorful works. I am also influenced by Roots Reggae Artistes such as, Bob Marley, Peter Tosh and Burning Spear. Their messages of truth, equal rights and Justice are ever inspiring and comforting.

I have no one piece to single out. Yes, some are more memorable of course, because of the impact the work has had. My Haiti Posters, designed in solidarity with the people of Haiti, devastated by the 2010 earthquake, are the ones I am happy to have contributed to the Haiti Poster Project. I am also proud of my Arab Spring posters supporting the grass roots uprising across the Middle East region to remove oppressive governments from their backs.

I have already started on a dream project. The Reggae Hall of Fame. In 2012, I started a “why not?” campaign to establish a Reggae Hall of Fame Museum in Kingston, Jamaica. Interest in this led to my founding the International Reggae Poster Contest. Today, my partner Maria Papaefstathiou, and I have successfully launched the second annual contest in 2013. For the inaugural contest in 2012, we received 1,142 Posters from 80 countries. We also held two exhibitions of the top 100 posters. The first exhibition was held at the National Gallery of Jamaica, and the second at AKTO Design College in Athens, Greece. We also auctioned a selection of posters from the contest in Kingston, Jamaica, and raised over US$6,000 for an important Institution in the history of reggae music, the Alpha Boys’ School. Alpha Boys’ School is a Sister of Mercy run school for wayward boys in Kingston, Jamaica. This school is credited with shaping the musical journey of many of the founding fathers of Reggae Music. Raising money for this school is one of the contest objectives. I also had the opportunity to rebrand the school’s corporate image. The director of the school Sister Susan Frasier, decided to use one of my iconic Poster images to celebrate the school’s new logo.

There are many in the field who deserve to be recognized in the field of graphics and poster design. For example, some of the new young Cuban artists who have taken the baton from the earlier masters. Today, access to the wider world is still limited to Cuban designers due to the limited access to high speed Internet and the embargo. Slanted magazine, from Germany, an independent publication on graphic design, typography, photography, and illustration— has launched a crowd-funding initiative for a project to expose the works of the amazing young Cuban poster designers through their magazine. I am delighted that they are reaching out to the young Cuban designers and giving them an opportunity to share their art on such an international scale. There are also other young artist and designers who are creating powerful designs and illustrations; Taj Francis, a young Jamaica illustrator is one to be applauded for powerful and dynamic illustrations. Dane Thompson, who is my son, for his urban design aesthetics that are outside the box. I find his creative visual expression captivating and fresh.

I am not always one to give advice, However, the best advice I can give is to be passionate in what you do. Open your hearts and eyes to the issues of the wider world. Educate yourself about the problems confronting a large segment of the world’s population; poverty, oppression and lack of resources we take for granted in the western world. We are designers and we have powerful tools at our disposal so lets use them to help bring about positive change and support those who are making a difference for the marginalized and impoverished people of the world.

I am looking forward to new opportunities for Freestylee exhibitions in 2013. At the moment, I am in discussion with a gallery in New York, for an upcoming Freestylee poster exhibition in Spring. On 14 April 2013, I will be conducting a talk about my work at the Allentown Arts Museum in Allentown, Pennsylvania. I am also looking ahead for more creative activism initiatives that will make a difference, and to expand the International Reggae Poster contest campaign toward our objective the Reggae Hall of Fame Museum.

Special thanks and credits to Maria Papaefstathiou, graphic designer and blogger based in Greece and to the record label, Power House and Christopher Bateman for use of the Wilfred Limonious artworks via the websites; wilfredlimonious.com and infinestyle.wordpress.com.