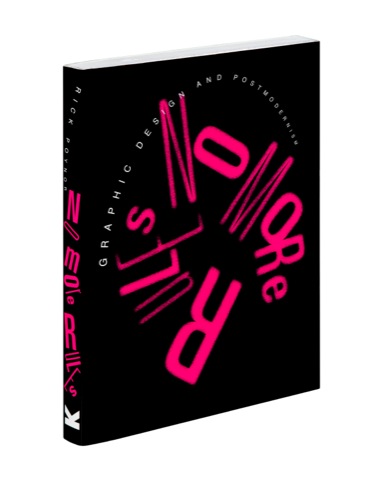 The book – with David Pearson cover and Kerr Noble editorial design intact – tackles the messy, confusing and prolific graphic design scene of the 1980s and 1990s. It aims, in the words of Poynor, to ‘make sense of the movement’s ideas and achievements’.

The book is not intended as a polemic, as Poynor writes in the preface, ‘[The book] doesn’t set out to argue that there shouldn’t be any rules in graphic design, only that during this period many designers, including some influential ones, have proceeded as though this were the case.’

Poynor attempts to put a semblance of order on Postmodern graphic design, looking at its origins (Wolfgang Weingart, Memphis etc), its focus on breaking breaking graphic designs ‘rules’ and conventions and opposition to the movement – with Massimo Vignelli and Paul Rand among the headline critics of the movement.

No More Rules is a hugely comprehensive book featuring work from all the heavyweights (Brody, Carson, Saville, TDR) and much, MUCH more.

Poynor says, ‘Writing No More Rules offered the chance to revisit an exciting design movement in which I had been involved.’ Poynor’s passion, insight and eloquence make No More Rules an exhaustive – and occasionally exhausting – analysis of one of graphic design’s most influential recent movements.

No More Rules: Graphic Design and Postmodernism, by Rick Poynor, is published in new mini format by Laurence King priced at £12.95.