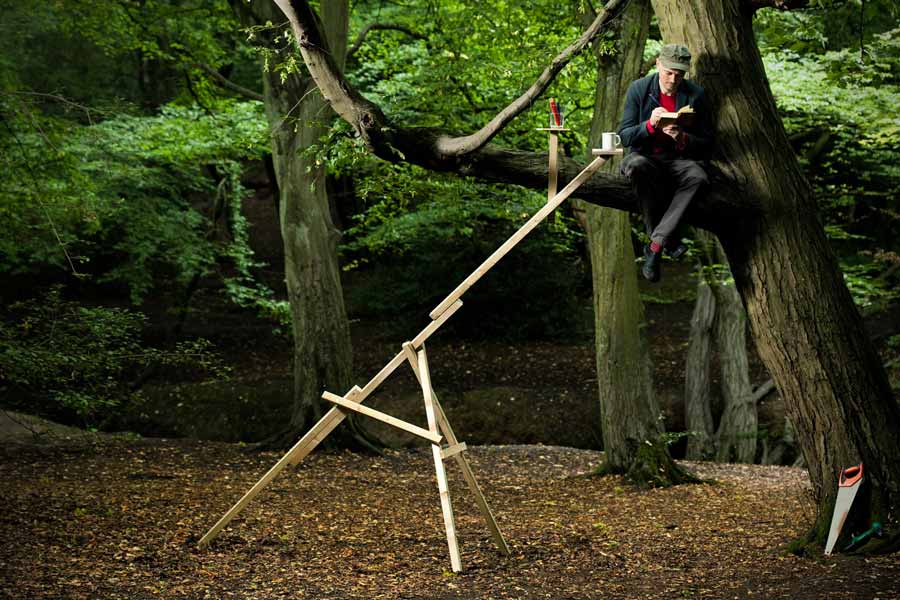 I left school knowing that I was third best in class at painting. I had no real idea whether I was creative, I don’t think the thought crossed my mind, my focus was purely on my painting technique. At first I naively thought that I should become a graphic designer as I thought that was probably a bit like art but you got paid a weekly wage for it. I started to realise most of my ideas in my sketch books came out in the form of objects. I was interested in making observations on people but expressing them through everyday things. I’ve been doing that ever since.

After moving to London I worked in Foyles bookshop, which was chaotic but charming back then, then I left there to go on trial at The Partners. During that three-month trial I saw a documentary on TV about the RCA Design Products course and I decided that was what I wanted to do instead. I still keep in touch with The Partners people, particularly the excellent Jack Renwick, who later left to start her own consultancy.

I usually just say what my last project was (self-navigating GPS shoes) and my next one (invention drawings for a new book) and hope that people get some rough idea. Artist or designer? I personally don’t care, but many people like to know where they should place you. I love innovation, creativity and finding conceptual surprises hidden in the banal things that surround us each day.

The internet has, of course, had a profound effect on the way designers share and view design. There seems to be more design in the world, good or bad, than ever before. The fact that the internet is a readily available stage for communicating directly with many people seems to give added motivation to designers for creative expression.

My watch sculptures, where I balanced tiny models of people on the hands of watches, are a favourite. Particularly as it came from a previous project where I challenged myself to make something creative each day for 30 days. That project took it out of me, I was trying to force myself out of creative block, I was very happy that it led to my watch sculpture idea.

I thought Thomas Heatherwick’s Olympic cauldron was excellent both in concept and to look at. I also admire how brave it was to make something so complex knowing one mistake would go down in history in front of billions of viewers. Harry Hill’s You’ve Been Framed was devastated at its success.

Not to believe in myself enough when I was starting out. I wasted too much time with self-doubt.

I tend to take each day as it comes, there isn’t any great plan. Leonard Cohen once said success is survival doing exactly what you enjoy doing. I think I’m doing that now and will see where that takes me. I enjoy doing things I haven’t done before, pushing myself out of my comfort zone, I like the title of the book ‘Feel the Fear and do it Anyway’.

I enjoyed listening to Ron Arad reacting to what was in front of him. I think the best designers are very instinctive, they tend not to procrastinate too much.

It really depends what they want out of it. I think it’s important to be aware of what has been done before in order to do something new. However, to also keep a mental distance from things so that the work you do is unique and not just following a trend. I think for designers setting out on their own it’s important to make a connection between your inner self and the work you produce. I’m interested in people and their unique personalities and I like to see that expressed in their work. Also I would say that doing something is better than sitting thinking about doing something. Over-thinking before starting a project is a common fault. Show your work to as many people as you can, don’t hide your ideas away, don’t be scared of failure. I think the line between failure and great work is so fine that sometimes you have to risk entering the world of potential disaster to find the good stuff.