The travelling international design talk series touches down in Berlin in May where other speakers include illustrator Kate Moross, typographer Anthony Burrill and designer and author Ken Garland.

Conference director Jürgen Siebert says, ‘We like to touch and be near well-designed products. This has always been the case. 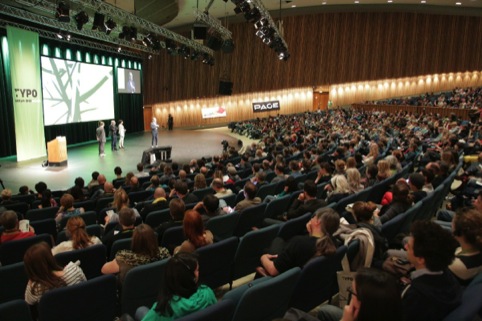 ‘However, today it also applies to screen interfaces, which want to be in touch with the user all the time. The relationship between people and machines has become a tender one.’

For the purpose of the conference Typo wants to put aside design’s functional mandate and instead talk about how ‘design should make objects and graphics attractive, make people feel they would like to touch them and make people want to have them around.’

Also on the bill is Jessica Walsh, partner at New York-based Sagmeister and Walsh. A lot of words seem to be spent on how Walsh is famously young, and at 25 has become the business partner of Stefan Sagmeister.

A notable feat, but she’s also prolific, and has an impressive portfolio of award winning work, which she’ll be sharing with Typo.