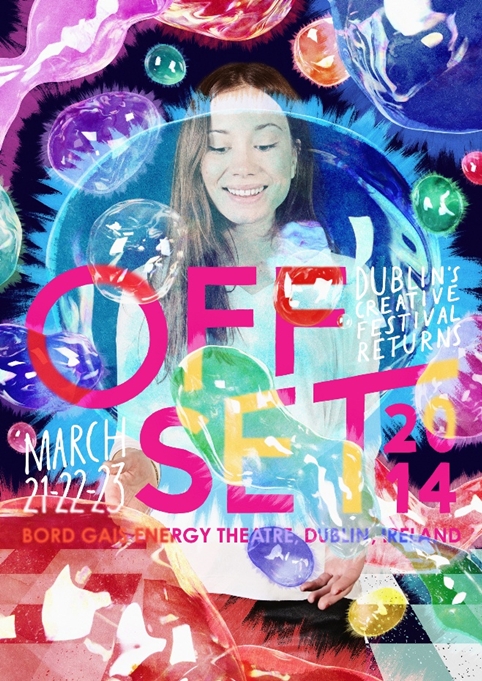 Jessica Walsh’s career, she says, is hugely informed by being playful. The act of play shapes, makes and inspires her work, and she often puts herself – as the ‘player’ – at the centre of what she does, though she insists this is often simply because she and her partner at Sagmeister Walsh Stefan Sagmesiter are ‘the cheapest models – we’re  free!’

Her playful, experimental dynamic took what seems to be a rather vulnerable, difficult, and openly therapeutic (in the ‘lie on the couch’ , rather than the aromatic candles and yoga sense) for her 40 Days of Dating project, in which she dated her friend and fellow designer Timothy Goodman for 40 days, and wrote about the trials and tribulations of doing so online.

In Tom Hingston’s talk, he says that when looking to take on new designers, he’s just as keen to see their  thought processes as their finished designs. Sketchbook, diaries and journals delineating their experimental workings are crucial, he says. ‘There are often gems hidden away in these books that you don’t see in the final portfolios’, says Hingston. It’s much more interesting to get a sense of their thought process’.

Jon Burgerman describes his sketchbook as a ‘catalogue of ideas’, as well as a medium itself, showing a few flip-book animations created on the hop.

Neville Brody, too, talks about how vital play is to being a successful designer. ‘A lot of designers are stuck in fear – of losing jobs, or clients…but we need to move to a place where we can think about play, chaos and failure’.

‘[Sometimes it’s about] approaching the page in as painterly way as possible – painting with type to try and get a different dynamic. Type is something sculptural’.

Brody opens his talk with the almost proud admission that his first college, London College of Printing, ‘failed me’. He goes on, ‘When I was at LCP all my teachers said I was shit apart from one’.

That wasn’t to stop him going on to become one of the most iconic graphic designers and typographers of the late 20th and early 21st centuries. In fact, courting the possibility of failure is something Brody delights in. ‘I think we should be making trouble’, says Brody. ‘[Design] shouldn’t be nice, and safe – we’re stuck in a place of fear’.

Burgerman looks at mishap through a rather more lighthearted lens. He cites unscripted events and improvisation as positive tools to shape your work, looking to the example of a pine marten escaping onto a football pitch to illustrate his point. ‘ENCOURAGE THE FERRET’, Burgerman urges. Happy accidents, he says, can lead to innovations.

Do it for the money, but do it just as much for the love

The notion of free pitching [link] unsurprisingly rears its ugly head on more than one occasion during Offset’s talks, and – again unsurprisingly – it’s something very much discouraged.

Many speakers view design not just as a creative role but as a job – and one that has to pay the bills. As such, while there’s unanimously a hugely creative sensibility to the speakers, there’s little notion of clinging to the idea of a ‘tortured artist’. Instead, time and time again we’re reminded of the business savvy and nous it takes – or perhaps has to be learned –  to be a designer today. However, for all the bureaucracy that comes with commercial work, it’s love of the craft that makes a career successful in the first place.

In Neville Brody’s interview by Adrian Shaughnessy, Brody speaks of designing corporate identities form the age of seven ‘for fun’.

‘That was my idea of fun – branding’, he says, without a hint of jest.

‘I was always going to be doing art of some sort’, Brody adds. ‘From birth this is what I was going to do’.

Tom Hingston’s passion for what he does meant that in his early years as a designer, as well as working for Neville Brody’s Research Studio full time, his evenings (and nights, and very early mornings…) saw him designing band flyers until 4am.

We hear Milton Glaser’s talk through a video interview, conducted at his home in New York. He sees his work as, converse to much of the discourse around design, not about persuasion. Instead, he says, ‘One function we have collectively as anyone involved in the arts is to help people see what’s real. Everything has been swept aside by ideas of fame and money’.

He adds, ‘The desire to make something is a profound and lifetime commitment’.

Marina Willer, formerly of Wolff Olins and now a Pentagram partner, cites the well-worn example of the Wolff Olins-designed Olympic logo as a case where online trolls have a field day. Such digital critics, she says, ‘are discouraging creativity’ by taking work out of context, ignoring the fact it may have been changed by the client, or simply delighting in pulling apart the work of others where they ‘have done nothing [creative with their lives] – they just like being negative’.

Make the most of education, in any form – and don’t take it for granted

As the Offset speakers discussed their backgrounds, it became very clear how much their design education shaped them. Many designers referenced tutors  by name, and nearly all were keen to point out how difficult it has become to enter into higher education with the now extortionate fees – upwards of £9000 per year. While it’s now possible, on paper, for designers to learn the basics of their craft from such depersonalised media as YouTube tutorials, online crib sheets and the like, education is about more than that, we;re told. ‘[Good higher education] guides you to become who you are and find your direction – to become someone who questions stuff’, Brody tells Shaughnessy.

Report calls for a ‘revolution’ in design education