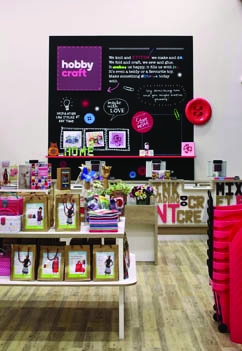 The consultancy was brought on to the project in November by private equity group Bridgepoint, which owns Hobbycraft and other companies 20/20 has worked with, including Pets at Home.

After working with Circus on the early direction of the brand, 20/20 developed an identity which has fed into the environmental design.

The new look is particularly aimed at young women with children and has been led by a pink-and-aubergine colourway.

It suggests a ‘hint of craft’ but with a ‘modern typeface’ and a tactile feel, which is continued inside the store on signage, carrier bags and uniforms, says 20/20 client director Lorraine Tovey.

Within the store, landscaping has helped ‘showcase products and open up the store’s repertoire’, says Tovey.

Clearer navigation and colour-zoned areas and lower fixtures have been introduced to give what 20/20 calls ‘a department store feel’.

Elemental has designed window displays and visual merchandising and  Chris Brown and Summerhouse the brand’s tone of voice.

The concept has opened in a new store – Hobbycrafts 52nd  – in Orpington, Kent and will now roll out across other stores nationally.