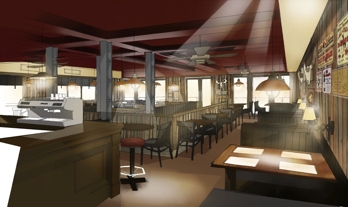 Following its appointment in December 2010, Design LSM was tasked with creating interiors for the restaurant in the style of a traditional American diner.

The site, which will include an 84-cover restaurant, a 100-capacity basement bar and a ‘smoke pit’ for cooking food, has been inspired by diners and the natural landscape of Colorado, says Design LSM design director Tim Burford.

The interiors will feature both booths and bar stools made from dark wood and cracked leather. Pine, oak and brick fixtures will accompany a large hardwood bar in the restaurant and a concrete bar in the basement.

The biggest challenge of the project was to subtly include Mid-West-inspired objects such as water buffalo skulls, moose heads and pictures of the railroads and the rodeo without ‘over-theming’ the restaurant, says Burford.