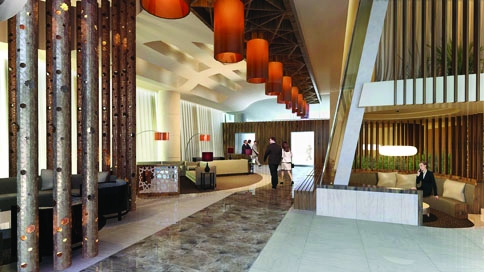 The lounge is sited within a new-build hangar, which was completed last year.

SHH was appointed for the project without a pitch in August 2010, having been approached by Rizon Jet’s financial backing company Consortium on the strength of previous work for them.

Guy Matheson, SHH associate, says, ‘It has a facility in Dohar with the concept designed by a local designer, but the local representative here tasked us with taking the Doha branding and making it more European, as it was very Arabic.’

SHH was briefed to create an ‘ultra-high-end space’ with a comfortable lounge feel. It used materials including marble for the floors, bronze and laminated glass.

Matheson adds, ‘It’s quite rich and homely. There will be further interest added through rolling art displays and the furnishings, so it’s fairly neutral but ultra high end.

‘It’s about creating a space that people want to spend time in.’