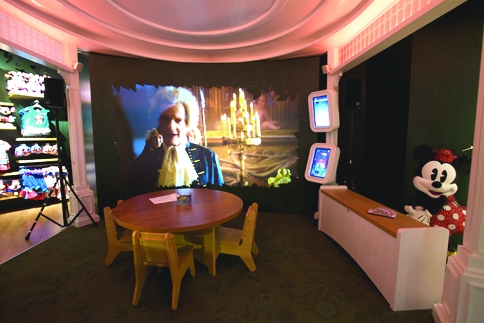 Flanked by Mickey Mouse and Donald Duck in sentry boxes – dressed as palace guards – will be an 8.5m-high castle centre-piece broadcasting Disney animations.

Also in store, a digital map has been designed to encourage children to discover London landmarks as seen through films including Peter Pan, Mary Poppins and 101 Dalmatians. This relates to a paper takeaway map.

A ceremonial ‘imagination’ clock has been designed. Twelve Disney characters count down until the moment – every day – when a child ‘unlocks imagination’ with a key, Disney says.

The ‘immersive retail experience’ is Disney’s second largest globally and has been designed as a destination to, for example, host daily events for children, according to Teresa Tideman, joint managing director of Disney Store Europe.

These will mainly be held in the Disney Store Theatre space which houses an interactive screen, the Imagination Station (pictured), where children can choose from more than 50 Disney film clips.

Other design highlights include The Disney Skyline which gives ‘the illusion of a bigger magical world’, synthetic trees flanking a ‘pixie dust path’ and a Disney Princess Magic Mirror.