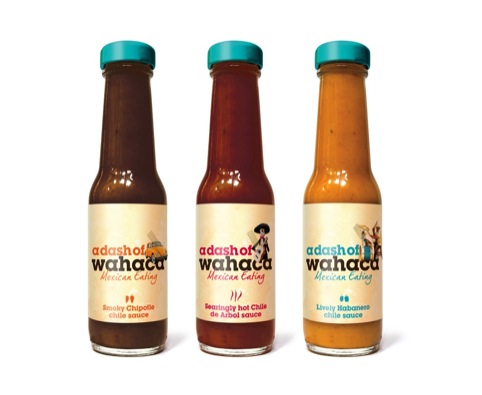 Buro started working on the packaging project, for a range of three chile sauces, around a year ago, having previously worked to create the Wahaca branding and other collateral, according to creative director Roly Grant.

Grant says the consultancy had to develop packaging that would stand out on supermarket shelves, but would also fit into the main Wahaca branding when the sauces are used in restaurants.

He says, ‘We’ve used the same colour palette and text style as the restaurants, and introduced individual characters for each one.

‘The fiery sauce is illustrated with a Mexican drummer who travels round markets banging his drum, until people tell him to stop.’

The Wahaca range, which launches in supermarkets this week, currently comprises three varieties of sauce.

Grant says the packaging has been designed to be adaptable for any future product roll-outs. For example the strapline ‘A dash of Wahaca’ could be changed to fit other foods.

The range, which has been created by Wahaca co-owner Thomasina Miers, is being sold under licence by All About Food in Sainsburys and Asda stores.