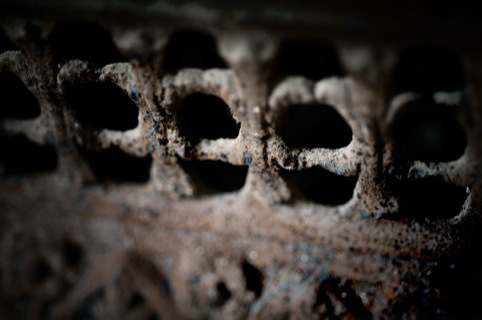 Her madam’s office is very much in order, nestled above a Victorian pub. Your guide to the space is stories from 19th-century copies of the Hackney Gazette – peruse it as you feast on cockle-shell cakes, all the while sniffing at the scent of musty Victorian clothing.

Taking design into the realm of the past is Traces, a new immersive selling exhibition being held at a secret location on 17-19 August.

Organisers Donna Walker, a product and spatial designer, and set designer Talulah Mason are working to bring the building, a former Victorian pub, back to life – painstakingly recreating the space in minute detail right down to the smells and sounds.

Visitors can see and buy the work off up-and-coming designers and artists in a highly experiential, theatrical setting – using the works as props through which to explore the history of the building and the people that inhabited it. To find out more details and the exhibition location, visitors have to piece together clues from traces-london.co.uk.

On researching the space they are using, Walker and Mason discovered the lady renting two rooms upstairs during the late 19th century did not have her profession listed within the business directories – usually an implication that it was used as a brothel. So, obviously, they’ve drafted in a sound artist (Ian Tripp), to recreate ‘brothel sounds.’

The branding for the event was created by Phil Bosher, who works for Mother, with copywriter Shiela Chandra. Creating the Traces catalogue in the style of late 19th century Hackney Gazette newspapers is graphic designer Athanasios Kontos with illustrations by various artists including Camilla Barnard, Louise Boulter and Lil Adams.

Among the wonderful-sounding product, furniture, ceramics, illustration, jewellery and fine art pieces on show is bar furniture by Hendzel and Hunt; a doorbell that ‘knocks’ the door when rung, by Bobby Peterson, who created Musical Chairs for the V&A; and interaction designers Studio801 and Tim Burrel Seward’s reactive desk and heat reactive coasters.

Graphic Relief has created Victorian-style cement tiles for the bar area, and London Chair Collective’s Debbie Lowndes is designing furniture for the mocked-up brothel office. The ‘stolen goods’ room contains jewellery, homeware, textiles, taxidermy and paintings which have been created to sell at the show.

For that real Victorian aesthetic, ‘smell artist’ Olivia Clemence has created a distillation machine that extracts smells from Victorian clothing and will spray them into the room at timed intervals, and designer Mark Troctereau is making cakes inside cockle shells for you to sample.

Traces takes place from 17-19 August at a secret location. To find out more follow the clues at @traceslondon and traces-london.co.uk.