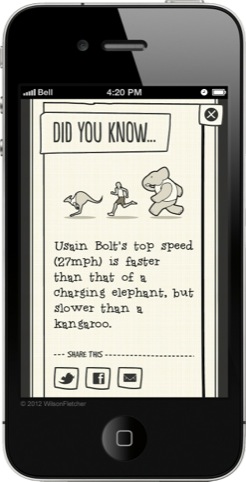 The app has been developed by digital consultancy Wilson Fletcher.

Wilson Fletcher designer Katie Buchanan (the eponymous Curly) came up with the idea last year at Wimbledon after hearing someone in the crowd asking a friend how many times the ball can bounce.

She says, ‘I’m a sports nut and I realised how little many people know about the sports they watch.’

Illustrated by Ryan Todd, the app features the character ‘Curly’, who guides viewers round the rules, statistics and interesting facts about each sport.

Each individual sport is represented as an illustrated playing card. A tap on each card will turn it over to reveal the rules of the sport, accompanied by some cool facts and illustrations.

The app is available through iTunes and Wilson Fletcher has also created accompanying website www.curlyspocketguide.com

What does your first impression say about you?

Together everyone achieves more

Six design myths (and one fact)