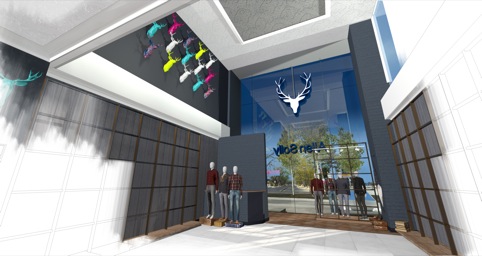 The consultancy was appointed to the project on credentials, having worked in India for the last four years. It opened a Mumbai office in November 2010.

The designs aim to reflect Allen Solly’s move from formalwear to targeting a new ‘fashion conscious’ and experimental’ audience, according to Dalziel & Pow.

A Dalziel & Pow spokesman says, ‘The big idea was to create an eclectic narrative through the use of materials to juxtapose the brand’s heritage with a more contemporary feel.

‘We have designed a light and spacious environment punctuated with artefacts, “a little something from everywhere”, to help create a strong narrative of found objects throughout the space.’

The store concept features materials and finishes including decorated brick, cut brass letters and corian surfaces. Bold colours and decorative lighting fixtures are used alongside ‘historical brand fabrics’, according to the consultancy.

The new concept will initially appear in the flagship store in Indiranagar, Bangalore, later this month, before being rolled out to a further three to four test stores. The brand will then decide on rolling it out across more outlets.