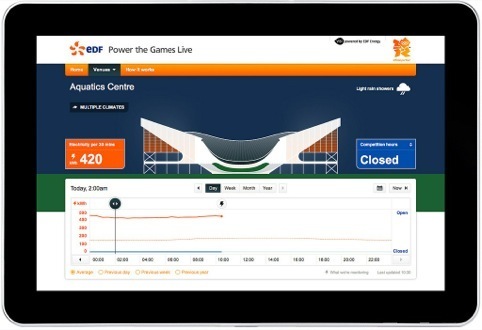 Peter Grundy was enlisted by Applied Works to create visualisations of each of the venues.

EDF, which is supplying energy to Olympics venues, appointed Applied Works directly in April 2011, tasking it with creating an energy visualization.

They developed a tool, Visi, which can demonstrate the benefits of monitoring energy use at The Olympic Stadium, Velodrome, Aquatics Centre, Basketball Arena, Tower Bridge, and the London Eye.

Peter Grundy was brought in to illustrate each of these venues and was chosen ‘for his simple style, which made for an excellent collaboration, as often energy dashboards are very overcomplicated,’ says Applied Works account director and partner Paul Kettle.

Applied Works researched energy demand with the energy mangers of each venue, before creating a tool which shows energy use over a timeline, and can be tracked by Olympic events or external variables including the weather and daylight.

Although Visi has been primarily designed to engage the public on factors that increase energy consumption, and how to optimise energy use, it will be used after the games for future energy managers to monitor stadium energy use.

London Victoria gets a new identity

A mentorship scheme's rebrand is based on “impossible shapes”

Lantern studio has given Zero Gravity a geometric new look, which seeks to highlight students’ hidden potential when applying to university.

Design inspiration: the best projects from May

From pub-scented candles, to Polaroid chemistry and a weekly cartoon strip inspired by the bubonic plague, this is what designers got up to last month.