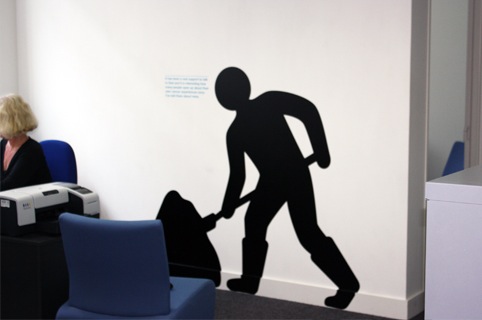 The organisation was formerly known as The Prostate Cancer Charity and has renamed and dropped the word ‘charity’ from its title.

It says, ‘Our research showed that only three of the top 100 UK charities use the word “charity” in the name and that the word is associated with fundraising, children and dependency – not with authority, research or expertise.’

As well as the new name Hat-Trick developed a new identity, based on the ‘man of men’ icon.

Hat-Trick co-founder Gareth Howat says, ‘The design reflects the numbers of men affected by the disease and is symbolic of men working together to find solutions.’

The consultancy also created the ‘manifesto’, printed in the form of a newspaper, which is aimed at both internal and external audiences.

Hat-Trick designed life-size male symbols, interacting with their surroundings, which are used as environmental graphics in the Prostate Cancer UK offices.

And this clock, which states ‘one man is diagnosed with prostate cancer every 15 minutes in the UK.’

Prostate Cancer UK says it hopes the ‘bold’ new identity – which was developed in a £190 000 project – will help it reach more men – as prostate cancer is predicted to become the most common cancer by 2030.

The National Trust launches a ‘sex, drugs and rock and roll’ app for Soho

The Olympics from the air