The Welcome to London stamps feature London landmarks blended with Olympic sports so, for example, the London Eye becomes the front wheel of a bicycle and the Olympic stadium is merged with a running track. 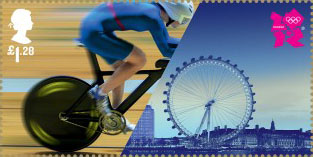 The other two stamps show a fencer’s lunge meeting the walkway of Tower Bridge and a diver alongside Tate Modern.

There are two first-class stamps in the set and two priced at £1.28, for worldwide airmail postage.

London Mayor Boris Johnson says, ‘Even fleet-footed Hermes himself would hang up his winged sandals and send his letters through Royal Mail if he saw the quality of these beautiful Olympics-themed stamps.’ 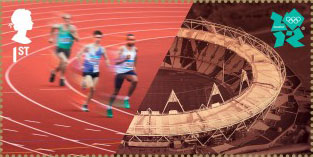 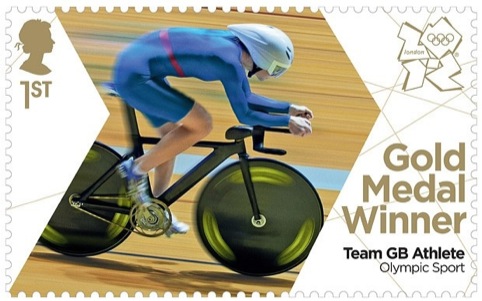 It will also be releasing special gold medal stamps throughout the Olympics, for each gold won by a British athlete. An example is show above.

Royal Mail says these stamps will, where possible, feature a photograph of the athlete or team in action from their gold medal-winning final.